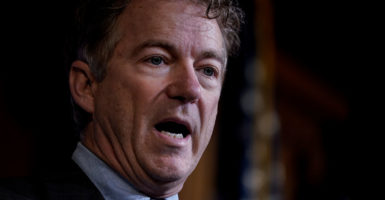 YouTube removed a video clip of Sen. Rand Paul mentioning the name of the alleged whistleblower responsible for filing a complaint that led to President Donald Trump’s impeachment.

The social media platform nixed the clip of Paul reading the question on the Senate floor after Chief Justice John Roberts blocked it during the impeachment hearing in February. The Republican mentioned the name of the alleged whistleblower, a person who many believe is behind the complaint.

The Daily Caller News Foundation has not independently confirmed the name of the whistleblower.

She added: “We’ve removed hundreds of videos and over ten thousand comments that contained the name. Video uploaders have the option to edit their videos to exclude the name and reupload.”

Paul told Politico that he never accused the person he named of filing the complaint.

“It is a chilling and disturbing day in America when giant web companies such as YouTube decide to censure speech,” the Kentucky Republican said. “Now, even protected speech, such as that of a senator on the Senate floor, can be blocked from getting to the American people.”

This is a based Rand Paul speech that everyone needs to see
pic.twitter.com/4XGcfFQFTL

Choi did not clarify when The Daily Caller News Foundation asked if the platform nixes all mentions of the alleged whistleblower’s name or if it removes only content that links the person to the complaint. She has not responded to follow-up questions about whether the company will update the policy given the ambiguity.

Senate Republicans acquitted Trump on Feb. 5 of two charges, obstruction of Congress and abuse of power.