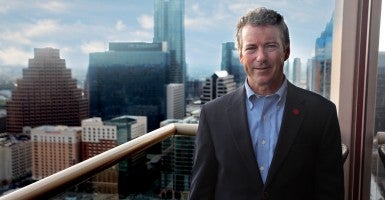 The Daily Signal sent three questions to Sen. Rand Paul, R-Ky., and he provided his answers by email over the weekend.

“Most Americans have fallen victim to an overzealous federal government.” —@RandPaul

Paul’s reply to the second question previews a  slogan—Defeat the Washington Machine, Restore the American Dream—he was set to unveil Tuesday in Louisville in announcing he will seek the Republican nomination for president.

1. What are your key guiding principles and why?

I am a huge proponent of the Bill of Rights and the checks and balances that are outlined in our Constitution. I believe in a limited federal government and that the individual is mightier than any collective.

2. How do you hope to broaden the conservative movement’s appeal among Americans without sacrificing those principles?

I think you’ll find that most people—young, old, black or white—value their individual rights and feel like the government has overstepped its bounds. Whether it’s Obamacare, NSA spying, our broken criminal justice system, Common Core, or bureaucracies run amok, most Americans have fallen victim to an overzealous federal government. I believe my message of defeating the Washington Machine and restoring the American Dream is one that resonates with the masses.

3. What misperception about you really drives you nuts? Here’s your opportunity to clear it up.

I’m very comfortable in my own skin, as a husband, father and physician. Since taking office I have not lost sight of that. I am who I am.