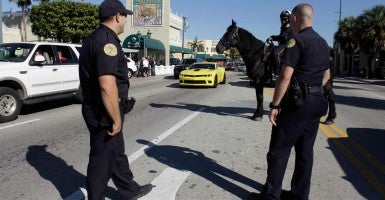 Florida is poised to become the new front in the civil asset forfeiture reform movement.

State Sen. Jeff Brandes, a Republican from the Tampa area, has filed reform legislation, which the Senate Appropriations Subcommittee on Criminal and Civil Justice discussed in a hearing today.

>>> The Heritage Foundation will co-host of an event next week in Tallahassee to help educate citizens about civil asset forfeiture in the Sunshine State.

Modern civil forfeiture laws arose out of the crime sprees of the 1980s. Law enforcement agencies were empowered to seize the property and money associated with criminal conduct to relieve drug kingpins and organized crime bosses of their ill-gotten gains. The agencies that seized the assets were allowed to keep the proceeds resulting from their seizures, creating a powerful financial incentive to seize and forfeit property.

In Florida, law enforcement can retain seized property for official use and spend forfeiture proceeds on a variety of “law enforcement purposes.” This vague and seemingly broad category has been used by many jurisdictions to justify a wide variety of highly questionable expenditures.

If an agency acquires more than $15,000 in forfeiture revenues in any given year, 50 percent of the amount beyond must be donated to other agencies or nonprofits.

In Georgia, a district attorney spent thousands on a personal home security system and pricey galas for his staff. In Philadelphia, forfeiture funds pay the salaries of the very attorneys who are pursuing forfeiture cases.

What the Florida Bill Would Do

Brandes’ bill, SB 1534, would impose new restrictions on how Florida authorities can spend their forfeiture dollars. Under this law, if enacted, state agencies would be permitted to spend forfeiture funds only to reimburse themselves for the cost of holding seized property (such as storage costs), and for paying down liens on the seized property and any outstanding court costs. All remaining proceeds would be directed to the Crimes Compensation Trust Fund, rather than to the general fund as under current law.

The new law would treat county and municipal agencies somewhat differently. These agencies would be required to deposit half of their forfeiture proceeds into a trust fund established by the elected governing body of the city or county, which could be used only to support crime and drug prevention programs, school resource officers and safe neighborhood programs. The other half would be directed to the Crimes Compensation Trust Fund.

If an agency acquires more than $15,000 in forfeiture revenues in any given year, 50 percent of the amount beyond must be donated to other agencies or nonprofits running drug treatment and education programs, safe neighborhood programs or school resource officer programs.

Presumably the remaining 50 percent of proceeds over the $15,000 threshold would be divided in the same way as the first $15,000; if that is not the case, this should be clarified. Details still need to be ironed out, but reforms such as these could go a long way to eliminating the profit motive for Florida law enforcement agencies and placing control of the purse firmly in the hands of state and local elected representatives.

The law makes clear no law enforcement agency—state, county or municipal—would be able to retain property for its own use, and as before, expressly prohibits agencies from relying on expected forfeiture funds as part of their budgets.

Brandes’ effort to direct forfeiture fund towards victim compensation, drug treatment and school safety is admirable and represents a middle ground between allowing law enforcement agencies to simply spend funds as they see fit and ordering law enforcement to turn over all proceeds to the general fund.

But lawmakers must remain vigilant in their oversight. For example, the sheriff’s office in Camden County, Ga., used $90,000 in forfeiture funds to buy a Dodge Viper, justifying this purchase as part of its Drug Abuse Resistance Education, or DARE, program. Reforms often require regulatory scrutiny and follow-up, and forfeiture reform is no exception.

If Florida passes this new law, it also should consider dramatically restricting law enforcement agencies’ participation in a federal program known as “equitable sharing” because it could be used to circumvent the restrictions imposed by the new law. Under that program, local and state agencies seize property, sometimes as part of a joint task force, then hand off the case to the federal government in exchange for a portion of the proceeds.

In the 2014 fiscal year, Florida agencies received $16,143,203 in federal payments. Under the rules of the federal program, this money must be spent by the agencies themselves, regardless of state laws to the contrary (such as the proposed SB 1534).

This program has engendered its own abuses. Police in Sunrise, Fla., recently were taken to task for poor accounting practices and questionable expenditures of equitable sharing funds. A Justice Department audit last year showed Sunrise police steered nearly $375,000 to a local law firm (despite not even being able to produce a contract for the firm’s services), which the Justice Department saw as a clear attempt to circumvent some of its rules.

So long as equitable sharing is permitted under federal law, state and local law enforcement agencies will be incentivized to circumvent state laws that are more restrictive than their federal counterparts.

Some states have prohibited cooperation with the feds on this point. For example, Washington, D.C., included a provision in its asset forfeiture reform bill that effectively disallowed its own law enforcement agencies from participating in the equitable sharing program. New Mexico has passed legislation, which is awaiting Gov. Susana Martinez’s signature, that would prohibit transfers of property when the effect would be to circumvent state legal protections for property owners. Such an option is open to Florida as well.

This is proving to be a banner year for civil forfeiture reform—in states controlled by Democrats and Republicans alike. New Mexico and Georgia have passed reform bills that now await the signature of their governors. The Maryland Senate has taken up a House-passed bill. And federal legislators are actively pursuing reforms at the national level. It’s time for Florida to take a hard look at civil forfeiture reform.

>>>Stop by the legislative briefing next week in Tallahassee if you are in the area.