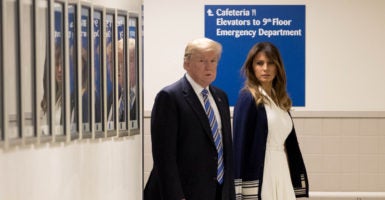 President Donald Trump and first lady Melania Trump during a visit Friday to Broward Health North, a hospital in Deerfield Beach, Florida, where many of those wounded in the massacre at a Parkland high school are being treated. (Photo: Allen Eyestone/Palm Beach Post/Zuma Wire/Newscom)

President Donald Trump praised first responders and doctors who tried to save as many victims as possible from the shooting rampage at a high school during a surprise visit Friday to Broward Health North hospital in Deerfield Beach, Florida.

Trump, who visited the hospital with first lady Melania Trump,  praised the speed with which law enforcement officers and other first responders reached Marjory Stoneman Douglas High School in Parkland, Florida, after the shots initially rang out Wednesday.

“It’s very sad something like that could happen,” the president told reporters at the hospital. “But the job the doctors did, the nurses, the hospital, first responders, law enforcement—really incredible.

“The speed that they got the victims over to the hospital is like—[in] one case 20 minutes, in one case 19 minutes from the time of the shots,” he said. “It’s an incredible thing.”

The Trumps made the visit two days after former student Nikolas Cruz, 19, opened fire inside his old school, killing 17 and wounding 15 or more others.

Cruz, who confessed to police that he was the shooter,  is charged with 17 counts of premeditated murder.

His lawyer said Friday that Cruz will agree to plead guilty in exchange for the death penalty being taken off the table.

Broward County public defender Howard Finkelstein, in an interview with ABC News, said Cruz  is willing to plead guilty if he could serve life in prison instead.

A long, drawn-out trial wouldn’t help the community heal, Finkelstein said, adding that failures in the system led to Cruz’s  committing the horrific crime, though that doesn’t excuse his actions.

Law enforcement failed, because every red flag was present. And the FBI apparently failed. And the security measures for somebody to buy guns failed. Every single system was ignorant or willfully blind. It seems to me that this kid was screaming for help in every which way—he was failed.

The FBI admitted it had failed to follow proper protocol after receiving a tip warning about Cruz’s potential behavior based on an online posting.

It remains uncertain whether Cruz  was the subject of those calls, CNN said, since many calls are described as resulting in “no written report.”

Cruz’s family had noticed some signs of depression after his adoptive mother died, a lawyer for the family said.

“Obviously, he’d lost his mom,” lawyer Jim Lewis said. “But they helped him get a job at a Dollar Tree store. They got him going to an adult education so he could try to get his GED and he seemed to be doing better.”