Where the 2016 Hopefuls Stand on Indiana’s Religious Freedom Law 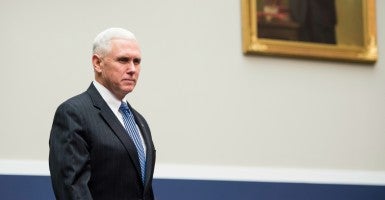 Eight Republican presidential hopefuls have offered their support to Indiana Gov. Mike Pence as he scrambles to put out a political wildfire over a new state law designed to protect the religious freedom of Hoosiers.

“It’s a fix of a bill that through confusion has come to be greatly misunderstood.” —@GovPenceIN

Other than unannounced front-runner Hillary Rodham Clinton, who tweeted her criticism of the law before the weekend, prospective Democratic candidates for president largely held their fire over an issue that pits many liberals against social conservatives.

At a press conference Tuesday in Indianapolis, Pence said he is working with state legislative leaders on an amendment to “make it clear” that the law doesn’t allow businesses to discriminate against anyone, including gays and lesbians, for religious reasons.

“I believe this is a clarification but it’s also a fix,” he said. “It’s a fix of a bill that through mischaracterization and confusion has come to be greatly misunderstood.”

Pence, who signed the legislation into law only last week, said he also has been in discussions with corporations and other organizations that do business in Indiana and hopes to have an amendment on his desk by week’s end. His announcement appeared designed to prevent boycotts and other protests from gathering steam.

I’m proud to stand with Gov. @mike_pence for religious liberty, and I urge Americans to do the same http://t.co/cWidDW2zpg

“This was not about discrimination,” @CarlyFiorina says of Indiana religious freedom law.

On Monday, former Florida Gov. Jeb Bush told talk show host Hugh Hewitt that he thought Pence had “done the right thing” in signing the bill and Sen. Marco Rubio said on the Fox News show “The Five” that the Indiana law wouldn’t make it legal to deny service based on sexual orientation.

“This was not about discrimination,” former business executive Carly Fiorina, who calls herself “more than 90 percent” likely to seek the GOP nomination, told the New Hampshire Union Leader on Tuesday. [Update: She later expanded on her comments with a Facebook post.]

See my thoughts on the Indiana law here. http://t.co/8ouzaiWP4U

Sad this new Indiana law can happen in America today. We shouldn’t discriminate against ppl bc of who they love #LGBT http://t.co/mDhpS18oEH — Hillary Clinton (@HillaryClinton) March 27, 2015

Hillary Clinton was first lady when her husband, President Bill Clinton, signed federal religious freedom protections into law in 1993 with near-unanimous support in Congress.  A Supreme Court ruling in 1997 limiting the scope of that law spurred action at the state level to strengthen religious liberty considerations in state courts.

Sen. Bernie Sanders, I-Vt., who some liberal Democrats would like to see challenge Clinton, took to Twitter on Tuesday to call Pence “dead wrong” and “on the wrong side of history.”

Some opponents to the Indiana law depict their fight as like the civil rights struggle of the 1960s. They argue it  would allow a restaurant owner, grocer or other merchant to refuse to serve gays or lesbians simply by citing a religious belief.

Such a “misperception,” “mischaracterization” and “smear,” he insisted, was the result of unnamed “advocates” as well as “sloppy,” “reckless” and “irresponsible” reporting by national news outlets that produced “deeply offensive” accusations Indiana gave a green light to discrimination.

Substance of laws not changed — whats changed is the anger,deception, intolerance from those on left who assault our religious liberties.

Pence said he doesn’t have specific language in mind. He said the amendment would clarify what Indiana and 19 other states intended in enacting similar statutes—generally known as Religious Freedom Restoration Acts, or RFRAs—mirroring the law signed by Clinton.

Simply put: Citizens who thought government had infringed on their religious liberty have recourse to state courts, which scrutinize whether officials had a “compelling reason” to do so and proceeded in the “least restrictive” way.

>>> These 19 States Have Religious Freedom Laws Similar to Indiana’s

The governor noted that President Obama—whose press secretary criticized Pence for his stance—supported similar legislation in neighboring Illinois when he was a state senator.

I stand with @mikepence4gov in defense of religious liberty and real tolerance. Will speak about this at GW tonight. http://t.co/TDPWHw91pL

After speaking for just over six minutes, Pence took questions for a half hour. His first questioner asked whether it is legal under the law for “a florist to deny services to a same-sex couple,” citing religious beliefs. “This law does not give anyone a license to deny services to gay and lesbian couples,” Pence said.

“This law does not give anyone a license to deny services to gay and lesbian couples.”–@GovPenceIN

However, reporters did not directly ask, nor did Pence say, what would happen if a business owner—perhaps a baker, florist or photographer—declined to provide services for a same-sex wedding out of a belief that it would be against his or her religion. Instead, Pence repeated more than a dozen times that the law did not give businesses a license to discriminate against, nor a right to deny service to, “anybody.”

“I believe in my heart of hearts that no one should be harassed or mistreated because of who they are, who they love or what they believe,” he said.

Advocates of religious liberty argue that Christians, Muslims, Jews and others with a deeply held belief that marriage is the union of a man and a woman should not be forced by the government to contribute to the wedding of two men or two women. This is especially so, they reason, when commonly offered services for weddings are widely available in a free market.

They point to a variety of actions against Christian owners of wedding-related businesses across the nation.

“RFRA simply gives citizens whose religious freedom has been burdened their day in court, including those seeking relief from being coerced against their beliefs to offer their services for a same-sex wedding,” Jennifer A. Marshall, an authority on religious freedom at The Heritage Foundation, told The Daily Signal. Marshall added:

It gives the courts a standard to weigh these citizens’ claims against government interests. The RFRA standard in federal law has served this country well for two decades. There is not a single instance of the kind of situation that opponents are suggesting, either as a result of the federal law or in the 19 other states with RFRA laws. The purpose of RFRA is to protect all faiths from government coercion.

Ten states where courts have bolstered RFRA-like provisions in their constitutions include Wisconsin, home to Walker, who is is at or near the top of the unannounced GOP field; Massachusetts, home to Warren, a potential Democratic alternative to Clinton; and Ohio, where Gov. John Kasich has not ruled out a White House bid.

Among 16 states considering their own RFRAs, two have Republican favorite sons eyeing the White House: South Carolina (Graham) and Arkansas (Huckabee). Arkansas, of course, is where the Clintons launched their political careers.

Later Tuesday, Arkansas lawmakers gave final approval to that state’s own religious freedom measure amid protests and sent it to Gov. Asa Hutchinson, a Republican, who has said he would sign it. [Update: On Wednesday, Hutchinson asked legislators to amend the bill to track the federal measure more closely.]

Like IN law, AR bill goes beyond protecting religion, would permit unfair discrimination against #LGBT Americans. I urge Governor to veto.

We must stand behind those who stand up for religious freedoms. Indiana’s law is the same that was supported and signed…

The Human Rights Campaign, which calls itself the nation’s largest civil rights group for lesbian, gay, bisexual and transgender (LGBT) Americans, on Monday supported Indiana legislation to include “LGBT Hoosiers” in existing prohibitions against discrimination in housing, employment and public accommodations as well as to clarify that the new law “cannot be used to allow discrimination prohibited under state or local laws.”

“Governor Pence keeps saying that equal protections for all Hoosiers are not on his agenda,” HRC President Chad Griffin said Tuesday, “but fair-minded people across his state are demanding that those protections get on his agenda, immediately.”

Tony Perkins, president of the Family Research Council, released a statement praising Pence for correcting the record but said his own Christian organization can’t support the amendment without seeing it. Perkins said:

The governor addressed the complete falsehood that RFRA is about denying people a seat in a restaurant or a room at a hotel. Christians would never deny people these services but being forced to participate in a ceremony that violates religious beliefs is completely un-American and uncivil. … If the government punishes people for living their faith, there are no limits to what government can control.

Pence said the Indiana press generally had gotten Indiana’s RFRA law right, but “some of the national reporting on this has been ridiculous.”

Asked whether he expected the “backlash” of the past few days, Pence paused and replied:  “Did I expect this kind of backlash? Heavens, no.”

Later, he added: “I was taken aback, and I have to tell you that the gross mischaracterizations about this bill early on, and some of the reckless reporting by some in the media about what this bill was all about, was deeply disappointing to me and to millions of Hoosiers.”

There’s no license to discriminate in #RFRA. I abhor discrimination & don’t think ppl should be discrim against because of who they are/love

Kate Scanlon, a news reporter for The Daily Signal, contributed to this article. It has been modified since publication.