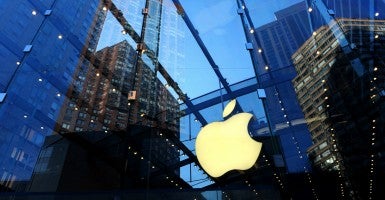 Apple CEO Tim Cook has taken to The Washington Post to tell the nation that, in the words of the headline, “Pro-discrimination ‘religious freedom’ laws are dangerous.”

Notice the scare quotes around “religious freedom.” But the reality is that the only person in favor of discrimination in this debate is Tim Cook.

It is Tim Cook who favors laws that discriminate against people of faith who simply ask to be left alone by government to run their businesses and their schools and their charities in accordance with their reasonable belief that marriage is the union of a man and a woman. It is Tim Cook who would have the government discriminate against these citizens, have the government coerce them into helping to celebrate a same-sex wedding and penalize them if they try to lead their lives in accordance with their faith.

This is a debate about whether or not the government should be able to coerce people into violating their belief that marriage is the union of a man and a woman.

Cook opens his op-ed by claiming the Indiana Religious Freedom Restoration Act is part of a spread of evil across the nation: “There’s something very dangerous happening in states across the country. A wave of legislation, introduced in more than two dozen states, would allow people to discriminate against their neighbors.” This is simply false.

As Sarah Torre and I explained last week, Indiana’s religious freedom law protects citizens from government coercion—it places the burden of proof on the government if it is going to violate liberty. For over 20 years, the federal government has lived by this standard—the Religious Freedom Restoration Act  passed unanimously in the House, with 97 votes in the Senate, and was signed into law by Bill Clinton. Twenty states have passed this law. And 11 additional states have religious liberty protections that state courts have interpreted to provide a similar level of protection.

So, in total, the federal court system and 31 state court systems enforce this level of protection. Why is Tim Cook suddenly opposed to it?

Cook, astonishingly, equates this belief with Jim Crow segregation. He writes: “The days of segregation and discrimination marked by ‘Whites Only’ signs on shop doors, water fountains and restrooms must remain deep in our past.”

This debate has nothing to do with refusing to serve gays simply because they’re gay, and this law wouldn’t protect that. But should the government force a 70-year-old grandmother to violate her beliefs? Should the government coerce her into helping to celebrate a same-sex wedding?

A Religious Freedom Restoration Act could protect her. But it might not. The law doesn’t say who will win—only that a court should review, using a well-established balancing test, and hold the government accountable to justify its action.

What’s most amazing in the debate over Indiana is the level of hypocrisy. Businesses are saying they’ll boycott Indiana over this religious liberty law. So they want the freedom to run their businesses in accordance with their beliefs—so they’ll boycott a state that tries to protect that freedom for all citizens? Do they not see that the baker, photographer and florist are simply asking for the same liberty?

Will Americans who believe what America had always believed about marriage—that it’s a union of husband and wife—be tolerated in the United States?

Indeed, Apple itself has exercised this freedom (or is the proper word, according to Cook, “discrimination”?). After all, Apple removed the Manhattan Declaration app from its App Store. Apple decided that a Christian app bearing witness to the dignity of unborn life, the nature of marriage as the union of husband and wife and the centrality of religious liberty was incompatible with its mission. So they “discriminated” against the Manhattan Declaration.

No one suggested that this should be made illegal. Even if we thought it a misguided decision, we thought Apple should be free to decide its own values and live according to them.

Cook, however, sees no tension when he writes “Our message, to people around the country and around the world, is this: Apple is open. Open to everyone, regardless of where they come from, what they look like, how they worship or who they love.” Apparently unless they are traditional Catholics, Evangelicals and Orthodox Christians who support the Manhattan Declaration. Then Apple’s message is “Apple is closed. Closed to those with beliefs we disapprove of.”

America is going through a time of transition. As marriage is redefined and as beliefs about human sexuality change rapidly, will the right to dissent be protected? Will Americans who believe what America had always believed about marriage—that it’s a union of husband and wife—be tolerated in the United States? Religious liberty protections are one way of achieving civil peace even amidst disagreement.

This need not happen.

After all, for years a central argument of those in favor of same-sex marriage has been that all Americans should be free to live and love as they choose, but does that freedom require the government to coerce those who disagree into celebrating same-sex relationships?

Family businesses—especially photographers, bakers, florists and others involved in the wedding industry—have been hauled into court because they declined to provide services for a same-sex ceremony in violation of their religious beliefs. Although Americans are free to live as they choose, no one should demand that government coerce others into celebrating their relationship.

Those who make decisions based on moral and religious views may well pay a price in the market, perhaps losing customers and qualified employees, but such choices should remain lawful.

Freedom of association and freedom of contract are two-way streets. They entail the freedom to choose with whom to associate, and when and on what terms, as well as with whom to contract and for what goods. Governmental mandates that force or prevent association violate these freedoms and should be pursued only for compelling reasons.

Many of the family businesses understand their professions to be extensions of their faith life. In this view, being a wedding photographer, for example, means not simply being another business offering services, but utilizing God-given talents to tell the story of a particular couple and their relationship. For them, celebrating a same-sex relationship as a marriage affirms that relationship. It is understandable that some religious believers would not want the government to coerce them into doing that.

Protecting religious liberty and the rights of conscience does not infringe on anyone’s sexual freedoms. All Americans should remain free to believe and act in the public square based on their beliefs about marriage without fear of government penalty.

It’s what true tolerance, pluralism and diversity require. Apple should give it a try.