Sexual Liberty and Religious Liberty Can Coexist. Here’s How. 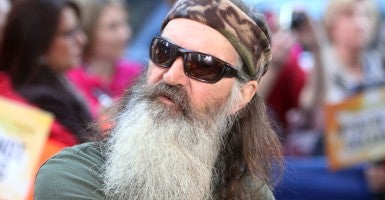 It’s true there are bad stories out there where people have been victimized by intolerance. Some of this has been at the hands of market leaders.

Consider Brendan Eich, who six years ago made a donation to Proposition 8, and six years later, when it was discovered, was forced to resign as CEO of Mozilla Firefox. Never mind that Prop 8, defining marriage in California as the union of a man and woman, passed with more than 7 million votes. That view was now considered unacceptable.

Or consider the case of Phil Robertson of Duck Dynasty.

And so, not surprisingly, A&E (the network that airs Duck Dynasty) and Cracker Barrel (the restaurant chain that had removed Phil Robertson’s products from its store) reversed their decisions within 48 hours. Robertson was no longer suspended from Duck Dynasty, and you could buy his wares at the Country Store at Cracker Barrel.

As these controversies were unfolding, no one suggested that Mozilla had to employ Eich or that A&E had to employ Robertson. No one wanted a law to force Mozilla and A&E to do this. No one suggested the government should coerce them into employing Robertson and Eich. They had the right to do what they did even if many Americans didn’t think it was the right thing to do. Much worse than the stories about Brendan Eich or Phil Robertson are the stories that involve government coercion, government fines and other punitive action. The examples are well known at this point.

Consider Christian-run adoption agencies in Massachusetts and Illinois and Washington, D.C., that have been forced out of the adoption space because they wanted to find homes with married moms and dads for the children they were responsible for.

Protecting religious liberty will entail a battle fought in a court of law but also a discussion that will take place in a court of public opinion.

These agencies weren’t trying to prevent gays and lesbians from adopting from other agencies, from the state agency or from other non-profit agencies. They just wanted to run their adoption agency according to their belief that children deserve a mom and a dad—and the state said no. The state said it wouldn’t grant them a license to run an adoption agency unless they placed children on an equal basis with same-sex married couples as they did with married mothers and fathers.

This does nothing to help orphans. It does nothing to increase the likelihood that parents adopt kids or that kids find homes. All it does is score a point for political correctness. It makes children victims in an adult culture war.

And most Americans don’t like this. While there are some activists pushing for this, by and large, whether you’re for or against gay marriage, this sort of thing is disconcerting.

Other examples involve photographers, bakers and florists, and even farmers in New York State. These are citizens who have no problem serving gays and lesbians but do object to celebrating same-sex weddings.

Barronelle Stutzman is one example. She had been providing flowers for a gay couple for years. But when they asked her to do the floral arrangements for their same-sex wedding, she had to decline. She couldn’t help celebrate that event because it violated her beliefs about what marriage is. The same is true of the photographer at the same-sex wedding or the baker and the same-sex wedding cake.

>>> Watch the story of Barronelle Stutzman

These challenges will come in unimaginable varieties and complexities, and it’s impossible to know beforehand how to respond in every single situation. Should we bake the cake, or should we not? Should we make the floral arrangements? What should our campus policies be? I don’t know what I would do because I don’t have those experiences.

And it’s the same with most Americans.

But it isn’t clear that forcing every photographer and every baker and every florist to help celebrate same-sex weddings is advancing a compelling state interest in the least-restrictive way possible. It’s not as if in New Mexico, where Elaine Huguenin resides, conservative evangelicals have a monopoly on the photography business. There are other photographers in New Mexico who support same-sex marriage and who are interested in making money and who are more than happy to do the wedding photography for same-sex wedding ceremonies. So it’s not clear why we need to have the government penalize Elaine.

And increasingly, most Americans agree on that.

We can have a system of live and let live. And even if government recognizes same-sex relationships as marriages, the government should not coerce third parties into celebrating that marriage. Government should respect the rights of all citizens. And a form of government that’s respectful of free association and free contracts and free speech and the free exercise of religion should protect citizens’ rights to live according to their belief that marriage is the union of a man and woman. No one has the right to have the government force a particular minister to marry them, or a certain photographer to capture the first kiss, or a baker to bake the wedding cake. Declining to perform these services doesn’t violate anyone’s sexual freedoms. Some citizens may conclude that they cannot in good conscience participate in a same-sex ceremony, from priests and pastors to bakers and florists. The government should not force them to choose between their religious beliefs and their livelihood.

Barronelle Stutzman was not looking to be a culture warrior. She was not provoking a culture war. She was just trying to lead her life in a faithful way as she understood it. She wanted to find a way to live and let live. She wasn’t going to prevent her customers from having their ceremony. She wasn’t going to prevent other florists from selling them flowers. She only asked to not be coerced to violate her conscience.

I don’t want to suggest these examples somehow constitute a war on Christianity or that somehow Christians are being persecuted in the United States. We’re not.

The government should not force Americans to choose between their religious beliefs and their livelihood.

There really is persecution going on in the world, and we shouldn’t trivialize it. In many parts of the world you can be killed simply for believing that Jesus is Lord. I don’t want to suggest that anything that’s taking place in the United States even comes close to that.

But what happens in the United States still matters. And as citizens of a self-governing republic, we should be engaged in trying to pass good public policy, to pass laws that serve the common good. We should be engaged in the political process to have our laws respect religious liberty rights for all Americans—not just for our co-religionists, not just for those people who hold the religious beliefs that we hold or who engage in religious activities that we approve of.

Religious liberty is for all people to worship and to lead their public lives in accordance with their religious beliefs—except for when doing so would violate a compelling government interest that the government is trying to advance in the least-restrictive way possible.

Protecting religious liberty will entail a battle fought in a court of law but also a discussion that will take place in a court of public opinion. Cynthia and Robert Gifford, farmers in New York, were fined $13,000 for declining to host a same-sex wedding. (Photo: Patchbay Media)

Many of our neighbors will not understand why religious liberty matters in the marriage context because they can’t understand why we believe what we believe about marriage. And the reason they can’t understand it is because we haven’t done a good job embodying it or explaining it or witnessing to it. So if many of our neighbors think our views about marriage are just a result of animus or bigotry, it’s because too many of us are remaining silent on this issue, so only extreme voices are heard.

This is one of the reasons why Sherif Girgis, my co-author of “What Is Marriage?”, does the work he does. He’s a very young person, he’s in his 20s. He graduated from Princeton with the highest honors and then went to Oxford as a Rhodes Scholar. Now he’s back at Princeton doing his doctorate in philosophy while doing his law degree at Yale.

Tolerance is essential to promoting co-existence in the midst of disagreement.

Why would someone like Sherif put all of those credentials at risk? If he just kept his mouth shut, he’d have tenure at a fancy school and a nice life. But he knows that in writing the book that we wrote and in giving the lectures on college campuses that he gives, he will be attacked.

Why does he do this? It’s not because of hate. No one I know involved in the marriage discussion is motivated by hate. Sherif does it because he wants to do what he can to help make the case for what he believes about marriage and to help other people, those who agree with him and who disagree with him, see the argument, point out flaws in the argument, point out the virtues of the argument and have a conversation about this.

Each and every one of us has to help witness to marriage in our own vocations. Sherif is a philosopher and legal scholar, so he does that given his particular calling in life. There are other callings in life—that of pastor and priest, of artist and musician, of spouse and neighbor and parent. We all have to find ways of making the case for marriage given our unique callings.

>>> Government ordered this couple to do something against their faith

We also need to love our neighbors. It’s not enough to say, “I love you,” and then lead our lives in ways that rightfully raise eyebrows. And we haven’t done a good enough job of loving our gay neighbors. We have to do better.

We have to work to protect the rights of Americans and the various associations they form to be free to speak and to act in the public square in accordance with their belief that marriage is the union of a man and woman—whether they be for-profit or non-profit, whether they be universities and colleges or charities and adoption agencies and businesses.

This essay is adapted from an address delivered to the Ethics and Religious Liberty Commission annual conference.