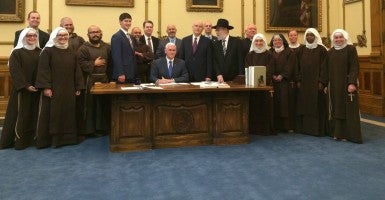 In a victory for religious freedom, earlier today Gov. Mike Pence, R-Ind., signed into law the state’s Religious Freedom Restoration Act. This is good policy that protects the fundamental freedom of Indiana citizens from unnecessary and unreasonable government coercion.

The Indiana law is based on the 1993 federal Religious Freedom Restoration Act—a law that has served the American people well for more than 20 years. Passed with 97 votes in the Senate and by unanimous voice vote in the House, the federal Religious Freedom Restoration Act was signed into law by then-President Bill Clinton. This federal law prohibits substantial government burdens on religious exercise unless the government can show a compelling interest in burdening religious liberty and does so through the least restrictive means.

No one has the right to have the government force a particular minister to marry them, or a certain photographer to capture the first kiss or a baker to bake the wedding cake.

By passing its Religious Freedom Restoration Act, Indiana joins the 19 other states that have implemented such laws. Eleven additional states have religious liberty protections that state courts have interpreted to provide a similar level of protection. These commonsense laws place the onus on the government to justify its actions in burdening the free exercise of religion.

Responding to critics of the bill, who wrongly characterized the religious freedom protections, Pence stated in a press release following the signing:

For more than twenty years, the federal Religious Freedom Restoration Act has never undermined our nation’s anti-discrimination laws, and it will not in Indiana.

Faith and religion are important values to millions of Hoosiers and with the passage of this legislation, we ensure that Indiana will continue to be a place where we respect freedom of religion and make certain that government action will always be subject to the highest level of scrutiny that respects the religious beliefs of every Hoosier of every faith.

But it isn’t clear that forcing every photographer and every baker and every florist to help celebrate same-sex weddings is advancing a compelling state interest in the least-restrictive way possible. Protecting religious liberty and the rights of conscience doesn’t infringe on anyone’s sexual freedoms.

No one has the right to have the government force a particular minister to marry them, or a certain photographer to capture the first kiss or a baker to bake the wedding cake. Declining to perform these services doesn’t violate anyone’s sexual freedoms. Some citizens may conclude that they cannot in good conscience participate in a same-sex ceremony, from priests and pastors to bakers and florists. The government should not force them to choose between their religious beliefs and their livelihood.

Of course, religious liberty isn’t just about the marriage debate. Just last year, the federal Religious Freedom Restoration Act protected the Green family and the Hahn family—owners of Hobby Lobby and Conestoga Wood—from government coercion at the federal level. Protecting this fundamental freedom has benefited many Americans during the last two decades, including those of minority faiths.

RFRA [Religious Freedom Restoration Act] means myself, my brothers, my sisters, my mom, my dad, we can all participate in American life in the way we had dreamed and really the way it is promised as written out in the Constitution. We have an opportunity to get jobs and to fully integrate within American society without having to sacrifice or compromise any part of our religious identity.

And earlier this year, in a 9-0 ruling the U.S. Supreme Court held that a similar federal religious liberty law protected a Muslim inmate’s right to grow a short beard.

Again, Religious Freedom Restoration Acts don’t allow individuals to do whatever they wish in the name of religion. There will be times when the government can show it has a compelling reason for burdening religious expression—to ensure public safety, for instance.

A robust conception of religious liberty provides every person the freedom to seek the truth, form beliefs, and live according to the dictates of his or her conscience—whether at home, in worship or at work.

Fortunately, citizens of Indiana now have greater protection of that fundamental right to live out and express their faith.