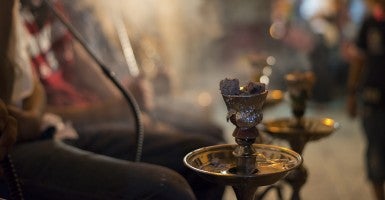 A North Carolina tobacco seller says the government is “screwing” his small business by forcing the shutdown of his bank accounts and payment processor as a result of Operation Choke Point.

And Brennan Appel, owner of Global Hookah Distributors, a tobacco products distributor based in Charlotte, N.C., is offering phone recordings to prove it.

“Have you heard of a little thing called Choke Point and [the Consumer Financial Protection Bureau]?,” asks Alex Bacon, the president of Appel’s payment processor, in a phone conversation.

They’re taking aim at industries like you and others to eliminate you from business by choking you off from payment processing.

“I was just in shock,” Appel said. “It doesn’t make sense when you’re with a bank for over 12 years and they just give you a couple weeks notice…and they don’t tell you why.”

“I think I’m getting screwed,” Appel told The Daily Signal in a phone interview. “In this country now, it seems like the people who are doing things right are the ones who are getting picked on.” After months of frustration, Appel, who started his business at age 18 as a way of paying for his University of Miami tuition, contacted U.S. Consumer Coalition, a grassroots organization based in Washington, D.C. that’s leading the fight against Operation Choke Point.

>>> Listen to the audio recordings here.

Operation Choke Point was designed by the Justice Department in 2012 as a way to reduce consumer fraud by blocking “high risk” industries’ access to bank accounts, payment processors and other financial institutions.

Last week, Justice Department spokeswoman Emily Pierce told The Daily Signal via email the agency has “no interest in pursuing or discouraging lawful conduct,” and also said the program—which she did not address by name—aims to “hold accountable banks and payment processors that illegally enable fraudulent businesses to siphon billions of dollars from consumers’ bank accounts in exchange for significant fees.”

But a 2012 list created by the Federal Deposit Insurance Corporation (FDIC), which was subsequently adopted into the Justice Department’s Operation Choke Point, suggests otherwise, grouping legal and legitimate industries such as gun and tobacco sellers with patently illegal activities like Ponzi and credit card schemes.

The FDIC has since removed the “high risk” list from its official guidance and walked back its involvement in Operation Choke Point, but Appel’s account suggests that other government agencies like the Consumer Financial Protection Bureau are still moving forward with the program.

The Consumer Financial Protection Bureau was established under the Obama administration through the Dodd-Frank Wall Street Reform and Consumer Protection Act. The agency supervises a broad range of banks, lenders, as well as large non-bank entities.

On the phone call, Bacon is heard telling Appel that his hands are being tied by federal examiners.

“[The federal examiners say] we’re going to make your life miserable. Instead of auditing you once a year we’re going to audit you four times a year. If we find anything negative we’re going to write it up and then you’re going to incur increased cost [and] increased focus from banking regulators.”

It is company policy for Global Hookah Distributors to record all inbound calls. Callers like Bacon are notified in a pre-recording.

Appel says that his inability to work with Bank of America and ETF Network has hurt his small business, which employs 12 people.

“It definitely hurt and it’s taken a lot of time away from investing and growing the operation… hiring more people,” Appel said. “What amazes me is that [the Obama administration] talks about job creation, job growth and I just don’t believe any of that anymore because all I see is [me] being targeted for absolutely no reason.”

Appel, who is now 30, claims he is banned from Bank of America for life.

He says he doesn’t know why.

But after his conversations with Bacon, Appel can only assume it’s because of the industry in which he conducts business.

“I don’t see what’s wrong with tobacco,” he said. “Consumers have a choice about what they want to do with themselves and their lives… I don’t understand why they consider something like this high risk or not acceptable.”

While he doesn’t explicitly blame Bacon or Bank of America for the government’s policies, Appel says banks owe it to their customers to stand up to federal regulators who are pushing what he considers unfair policies.

If they don’t, he says, banks end up “screwing” their customers as well.

They have a right to stand up for their customers. Hiding and just doing whatever government tells them to do…they’re hurting themselves and they’re hurting their customers. Part of the trust that a customer puts in their relationship with a bank is that they’re going to take care of them and I feel like the bank at the same time is screwing the customer over because they’re just enabling this type of behavior.

Although there’s recently been an influx of small business owners voicing outrage over the Justice Department’s Operation Choke Point, little has been done in Congress to address the controversial initiative.

Rep. Blaine Luetkemeyer, R-Mo., and Sen. Marco Rubio, R-Fla., both introduced legislation intended to end Operation Choke Point, but neither proposal has been enacted into law.

In the meantime, Appel is left outsourcing his banking needs to multiple financial institutions in fear of being dropped as a customer again.