Medicare for All Would ‘Result in Care for None,’ Doctor-Turned-Lawmaker Says 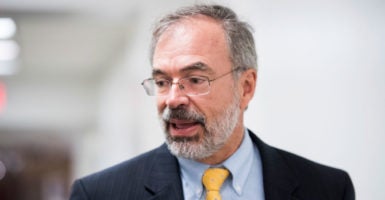 “You can't offer 'free' [health] care to everyone and expect anything but rationing to be the result,” says Rep. Andy Harris, R-Md., an anesthesiologist before entering politics. (Photo: Bill Clark/Contributor /Getty Images)

A congressman from Maryland who is also a physician says Medicare for All would end up depriving Americans of health care, rather than make it more accessible.

“The Medicare for All plan that was announced a couple of weeks ago by my Democrat colleagues, over 100 of them, really will result in care for none. That’s the bottom line,”  Rep. Andy Harris, R-Md., an anesthesiologist by profession, said Wednesday at Conversations with Conservatives, a monthly press question-and-answer session hosted by The Heritage Foundation.

“You can’t offer ‘free’ care to everyone and expect anything but rationing to be the result,” said the six-term lawmaker. “The costs are huge. We already have a trillion-dollar deficit in the federal government spending. To add more to it will result in rationing.”

Medicare for All—specifically, the plan from Sen. Bernie Sanders, I-Vt.—comes with a price tag estimated at $32.6 trillion over 10 years.

Among other things, Sanders’ plan would “prohibit ordinary Americans from purchasing any alternative health coverage, except for items such as ‘cosmetic surgery’ or health services that government officials decide are not ‘medically necessary,’ according to a recent commentary from Bob Moffit, a senior fellow in domestic policy studies at The Heritage Foundation.

The Maryland lawmaker says socialized health care is not the answer to rising health care costs and limited insurance options.

“When you dissect this plan, piece by piece, including the elimination of all private insurance, not even socialized medicine in England has that … so, we go well beyond the socialized medical schemes of Europe in the Medicare for All plan,” Harris said. “It is just going to be a nonstarter.”

Rep. Paul Gosar, R-Ariz., who owned his own dental practice prior to serving in Congress, joined Harris and Rep. Scott DesJarlais, R-Tenn., at the Conversations with Conservatives event, said more effort needs to be placed on making the free market work in health care.

“It is amazing what actually happens when you lower premiums, lower drug prices, lower doctor and hospital visits, and it empowers people to create new ideas,” Gosar said. “Making a market-driven solution is actually beneficial.”

DesJarlais, a physician by profession now in his fifth term in Congress, said Medicare for All would only make the ability to receive health care more of a problem.

“Access is the big thing. There just is not enough to go around,” he said.

“And when you consider that Medicare for All would eliminate what over half the country realizes now in an employer-based plan, most people, despite all the horrors we have heard about Obamacare, which is really bad, get their insurance through their employer,” DesJarlais added. “So, it would change that and eliminate private insurance altogether, and so people would be left with what the government tells them they can have.”

Harris said the importance of patient care needs to be restored as part of health care reform.

“We have got to come full cycle and restore it to the primacy of a patient,” Harris said.