Why ‘Medicare for All’ Would Be Bad News for Everyone 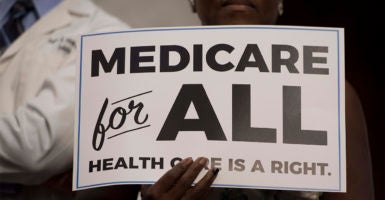 The House and Senate "Medicare for All" bills would abolish Medicare. (Photo: Jim Watson/AFP/Getty Images)

Polls from the Kaiser Family Foundation and the Harvard School of Public Health with Politico show a majority of Americans favor “Medicare for All” proposals at least in concept, which is simple enough: a single, government-controlled health insurance program that would cover every person residing in the United States.

The Harvard-Politico poll found that 68 percent of respondents say that adopting a national health plan like “Medicare for All” should be an “extremely important” priority for the new Congress. The Kaiser Family Foundation reports that 56 percent of Americans favor the proposal, and just 42 percent oppose it.

But do Americans really understand what such a project would entail? Based on the available survey evidence, the answer is no.

For example, the Kaiser survey found that 55 percent of respondents erroneously think that they would be able to keep their current health insurance. Only 35 percent realize (correctly) that they would lose it.

Likewise, a national survey conducted by the National Opinion Research Center at the University of Chicago found that 55 percent of respondents think (incorrectly) that participation in such a plan would be voluntary.

In fact, any American can easily learn “what’s in” the leading “Medicare for All” proposals. The legislative language of the leading Democratic bills (H.R. 676 and S. 1804) is clear.

The House bill, in other words, would prohibit ordinary Americans from purchasing any alternative health coverage, except for items such as “cosmetic surgery” or health services that government officials decide are not “medically necessary.”

Not surprisingly, the Kaiser Family Foundation survey found that if the “Medicare for All” plan would “eliminate private insurance companies,” respondents would oppose it by a margin of 58 to 37 percent.

Under Section 801, the bill outlaws employer-sponsored health insurance: “No employee benefit plan may provide benefits that duplicate payment for any items or services for which payment may be made under the Medicare for All Act of 2017.”

Ironically, the House and Senate “Medicare for All” bills abolish Medicare. Yet the Kaiser Family Foundation survey finds that a majority of Americans would oppose the “Medicare for All” plan by a margin of 60 to 32 percent if it “threatens the current Medicare program.”

The House and Senate bills would also abolish Medicaid, the Children’s Health Insurance Program, and Obamacare health plans. Under Section 212 of the House bill, federal funds are to be “transferred and appropriated” from the Treasury in “such amounts” that the secretary of health and human services estimates would have been “appropriated and expended” for Medicare, Medicaid, Children’s Health Insurance Program, and other “federal public health programs.”

Under Section 901 of the Senate bill, Medicare, Medicaid, and
Children’s Health Insurance Program programs would be phased out, as would the Federal Health Benefits Program and the Department of Defense’s Tricare program, providing health coverage for military families.

During the 2009-2010 debate on the Affordable Care Act, former President Barack Obama promised Americans, repeatedly, that if they liked their health plan, they would be able to keep their health plan.

This proved false: Millions of Americans, the vast majority of whom were satisfied with their plans, subsequently lost access to them.

In sponsoring House and Senate “Medicare for All” bills, liberals in Congress are making no such promises to Americans who want to keep their current health coverage. In fact, they are declaring, in black-and-white legislative language, exactly the opposite.

Whether you like your health plan or not, whether it is a good plan or not, your preferences would be utterly irrelevant. The bills now under consideration would take your existing coverage away, while outlawing any alternative for you and your family.

There would be no choice, and no exit ramp from the progressives’ new health care order.

Originally published in the Chicago Tribune