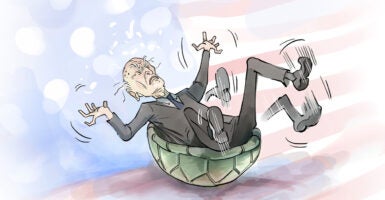 The left seemingly has a stranglehold on digital art. But some conservative artists are proving conservatives are enormously creative. (Photo: George Alexopoulos)

Scrolling through the sea of posts, pictures, and memes online can make conservatives feel like they’re outcasts. Endless screeds claiming anyone to the right of Mao is a bigoted and hateful person make up most of Twitter, Facebook, and Instagram. But a growing cadre of conservative creatives is trying to make its mark online and prove the left doesn’t have a monopoly on the digital world.

One of those artists is George Alexopoulos.

Alexopoulos seems to revel in his art, drawing comic after comic featuring stories straight from the headlines.

Some on the internet aren’t thrilled with his choice of subjects.

Alexopoulos, like many others on the right, is frequently accused of being a Nazi, a fascist, and a bigot because of his work.

And in response to a series of comics some perceived as endorsing groping, many described him as being sexist.

Alexopoulos says this is exactly why he keeps going.

In an interview with The Daily Signal, Alexopoulos explained, “When it comes to interacting with critics, a lot of them want to make things serious.” By contrast, he says, “As long as it’s all in good fun, I encourage it. A good sense of humor is key to pushing back against (the serious stuff) we see online.”

Despite his popularity amongst the online right desperate for some representation, Alexopoulos doesn’t see himself as a role model or a political influencer.

“I’m just a guy at his desk fooling around,” he says. “This is what the internet does—we laugh and post stupid things.”

In a way, that’s sort of the ideal end goal of the right’s push into the digital sphere.

Currently, the web is so inundated with leftist ideology that anything deviating from boilerplate woke dogma is considered by the left as an aberration in need of destruction.

You disagree with Dr. Anthony Fauci? Um, we don’t do that here.

The end goal should be that criticism of the left and statements like “there are only two sexes” aren’t met with mass vitriol like they currently are. Instead, they should be treated the same as the rest of online comments—one viewpoint among many.

Alexopoulos himself proves that the left’s current method of sanitizing the web through attacking critics doesn’t actually work and oftentimes drives people to be more assertive in their politics.

He added, “I don’t see what the problem is. Why can’t I keep doing what I’m doing? They can cancel me, but that won’t stop me from drawing more.”

Alexopoulos is correct, of course. There’s no reason that the left can’t just ignore his work if they hate it so much. The internet is a big, big place with plenty of echo chambers the left can retreat to.

But we know that’s not enough for them. The left must dominate everything, and so they try to push conservatives like Alexopoulos off the net.

It’s a reality that he acknowledged is creating issues for the right online.

“There aren’t a lot of us. I’d like there to be more,” he said. “The people in power don’t like to share that power with those on the outside.”

Those in power being the left that have a stranglehold on every facet of American public life.

But there are ways to bolster the burgeoning conservative creative movement online.

“Try to find a way to support your favorite illustrators,” recommends Alexopoulos. “There has to be a sign that it’s OK to be a conservative creator.”

“We’re scared of losing our careers,” he adds.

That is the crux of why the left continues to dominate everything. Conservatives for too long have been scared to rally behind those with whom they agree politically out of fear that they’ll lose their jobs. But if we are always ceding ground to the left, how can we expect to ever escape the left’s death grip on our institutions?

That’s why it’s important for conservatives to support each other online. They should purchase art from conservative artists they like or find some other way to financially support them via donations or subscriptions. They should widely share their favorite artists with their friends and family. And they should inject positive comments into the toxic morass of hatred from the left to prove there is an audience supporting conservative art.

We can’t be afraid of the radical left anymore. Like Alexopoulos says, we need to show it’s OK to be conservative and that we won’t leave our favorite creators out to dry when things get tough.

Conservatives are immensely creative. Why should we hide it?