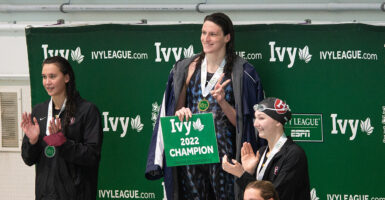 “Trans women are not a threat to women’s sports,” Thomas told ABC News and ESPN in an interview that aired Tuesday.

“Trans women are a very small minority of all athletes,” Thomas, who competed in women’s swimming during his time at the University of Pennsylvania, added. “The NCAA rules regarding trans women competing in women’s sports have been around for 10-plus years. And we haven’t seen any massive wave of trans women dominating.”

Thomas, a biological male, competed on the University of Pennsylvania men’s team for three years before identifying as female and transitioning to the women’s team.

“I knew there would be scrutiny against me if I competed as a woman and I was prepared for that,” Thomas said.

“I was prepared for that, but I also don’t need anybody’s permission to be myself and to do the sport that I love,” Thomas added.

Asked about a possible competitive advantage and the large change in ranking, Thomas responded, “There is a lot of factors that go into a race and how well you do and the biggest change for me is that I am happy.”

“If a man can compete in women’s sports after a few months of taking estrogen, then what is the logic in having sex-segregated sports in the first place?” Richards added.

Thomas also argued that it was “the biggest misconception” that he transitioned to “have an advantage.”

“The biggest misconception, I think, is the reason I transitioned,” Thomas said. “People will say, ‘Oh, she just transitioned so she would have an advantage, so she could win.’ I transitioned to be happy, to be true to myself.”

Indiana, Alabama, South Carolina, and 14 other states have instituted a variety of bans on biological males competing in women’s sports.

Thomas also indicated a desire to continuing swimming as a woman competitively, saying, “It’s been a goal of mine to swim at Olympic trials for a very long time and I would love to see that through.”