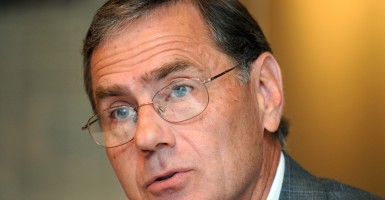 “While steps have been made in the case against Operation Choke Point, there is still a need for my legislation to be reintroduced this Congress,” he said in a press release.

The legislation, which Luetkemeyer previously introduced last November, comes one week after the Federal Deposit Insurance Corp. (FDIC) walked back its involvement in the program and reversed its policies in targeting legal and legitimate industries that are disfavored by the Obama administration.

Even though some view the agency’s backpedaling as a victory against Operation Choke Point, Brian Wise at U.S. Consumer Coalition says the policy changes are nothing more than a political stunt to “quell the public scrutiny of this program.”

“While steps have been made in the case against Operation Choke Point, there is still a need for my legislation to be reintroduced this Congress.” -@RepBlainePress

“While I am pleased the FDIC is implementing parts of my legislation, it is not enough. I am reintroducing the Financial Institution Customer Protection Act because this legislation needs to be codified into law so that other agencies don’t ever fall into this illegal and abusive practice.”

In 2012, the Justice Department set out on an ambitious mission to “reduce dramatically mass market consumer fraud” by limiting fraudsters’ ability to access bank accounts and other financial services. Whether intentional or not, the initiative resulted in the termination of bank accounts in a range of legal and legitimate industries.

The program operates by using government agencies such as the FDIC and the Consumer Financial Protection Bureau to threaten banks and third parties with regulatory consequences if they do not comply with banking regulators.

Luetkemeyer’s bill, which has bipartisan support, would prohibit a federal banking agency from “suggesting, requesting or ordering a depository institution to terminate a specific customer account, or otherwise restrict or discourage it from entering into or maintaining a banking relationship with a specific customer, unless the agency has a material reason to do so, and the reason is not based solely on reputation risk.”

The Missouri congressman, who’s also a former banker, hopes that now that the FDIC has made its involvement with Operation Choke Point “clear,” members on both sides of the aisle will see the importance of passing legislation.