Romney Gives Way to ‘Other Leaders,’ Takes Himself Out of 2016 Race 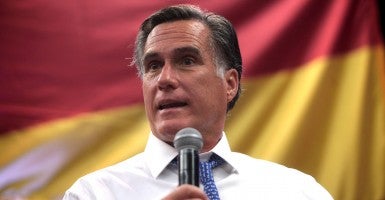 Mitt Romney has decided not to make a third run for president, he told supporters in a conference call this morning.

“After putting considerable thought into making another run for president, I’ve decided it is best to give other leaders in the party the opportunity to become our next nominee,” Romney said in prepared remarks published by Hewitt.

I feel that it is critical that America elect a conservative leader to become our next president. You know that I have wanted to be that president. But I do not want to make it more difficult for someone else to emerge who may have a better chance of becoming that president. You can’t imagine how hard it is for Ann and me to step aside, especially knowing of your support and the support of so many people across the country.   But we believe it is for the best of the party and the nation.

Many observers had thought Romney, while not making a formal announcement today, would seek to underline his seriousness about preparing to seek the Republican nomination.

Such a move was seen as designed to freeze the movement of big donors and operatives toward former Florida Gov. Jeb Bush, New Jersey Gov. Chris Christie or another GOP rival.

“It is critical that America elect a conservative leader to become our next president,” @MittRomney tells supporters.

Besides those two fellow establishment Republicans, Romney would have faced at least six strong conservatives in the battle for the nomination, among them Wisconsin Gov. Scott Walker and Sens. Ted Cruz of Texas, Rand Paul of Kentucky and Marco Rubio of Florida.

Bush was among the first of Romney’s rivals to offer a generous reaction to the news. In a post on Facebook, Bush said:

Mitt Romney has been a leader in our party for many years. There are few people who have worked harder to elect Republicans across the country than he has. Though I’m sure today’s decision was not easy, I know that Mitt Romney will never stop advocating for renewing America’s promise through upward mobility, encouraging free enterprise and strengthening our national defense. Mitt is a patriot and I join many in hoping his days of serving our nation and our party are not over.

A new average of polls published by Real Clear Politics shows Romney with nearly double the support of his nearest competitor, Bush. He led with 20.7 percent among 12 named GOP candidates. Bush followed at 11.2 percent, retired neurosurgeon Ben Carson at 9, former Arkansas Gov. Mike Huckabee at 7.6, Paul at 7.3 and Christie at 7.

“I am convinced that we could win the nomination, but fully realize it would have been a difficult test and a hard fight,” Romney, 67, said during the call.

In what sounded  like a shot at  Jeb Bush, who turns 62 on Feb. 11,  and perhaps Mike Huckabee of Arkansas, 59, also a well-known former governor,  Romney  said:

I believe that one of our next generation of Republican leaders, one who may not be as well known as I am today, one who has not yet taken their message across the country, one who is just getting started, may well emerge as being better able to defeat the Democrat nominee. In fact, I expect and hope that to be the case.

Bloomberg’s Mark Halperin, a veteran campaign reporter, broke the news that Romney scheduled an “update” in an email late yesterday to past donors that set the call for 11 a.m. EST.

Citing sources in the Romney camp familiar with the thinking of the former Massachusetts governor, Halperin identified three factors that impelled Romney to get into the race:

Of the polling numbers, Halperin wrote:

The data, collected over an extended period of time in the first 20  states scheduled to hold caucuses and primaries in 2016, shows Romney with a huge lead across the board, and significantly better favorable/unfavorable ratings than the rest of the large potential field.

Three weeks ago today, Romney shook up the 2016 landscape by telling a meeting of donors and other supporters in New York that he was “seriously considering” a third try for the White House.

Since then he has made two stump-like speeches – one Jan. 16  to the winter meeting of the Republican National Committee in San Diego and one Wednesday at Mississippi State University.

Downside factors considered by Romney, Halperin reported, included the personal toll on himself and his family of a third race in seven years. A second factor was the likelihood that he again would emerge bloodied from a nomination fight only to face a fairly unchallenged and refreshed Hillary Rodham Clinton as the Democratic nominee.

Romney had let it be known that a new campaign would emphasize expanding the middle class, implementing effective solutions to poverty and strengthening national security.

He first sought the party’s nomination in 2008. He wound up throwing his support to the eventual nominee, Sen. John McCain of Arizona, who lost the general election to a one-term senator from Illinois named Barack Obama.

Romney wrapped up the nomination in 2012 after a bruising primary season. He  went on to fall in the general election to President Obama after a closely fought campaign that was seen as his to lose.