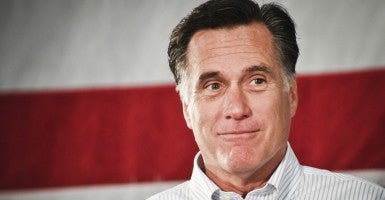 Mitt Romney won’t be running for president in 2016.

Speaking to supporters today, the former governor and 2012 Republican nominee said, “After putting considerable thought into making another run for president, I’ve decided it is best to give other leaders in the party the opportunity to become our next nominee.”

Good on #Romney for testing the waters, finding them cold and making the right call not to go.

In the 3 weeks since it was reported Romney was “almost certainly” in, the response has ranged from lukewarm to hostile. Had to factor.

Now that Romney is out, I expect Christie to become more aggressive to compete with Bush

So folks really thought Romney would announce a presidential bid on a conference call?

This is why Romney decided not to run http://t.co/1Q3DHiKROR

Romney announcing he’s not running? The first good decision he’s made since 2011.

Yay! #Romney is not running for POTUS! Hoping we don’t get stuck with a terrible nominee in the end. #2016

So Jeb didn’t “steal” the Romney advisor so much as he was given him.

Romney to his donors: “What you have already done is a tribute to your patriotism. ”

SHOCK: Romney not running for president in 2016. Interesting

Just think how much you’re going to be missing. You don’t have Romney to kick around any more pic.twitter.com/EK1JdTdV2J

Somewhere in a third-world country, an impoverished child awaits his Romney 2016 shirt.

The reason Romney is bowing out is because he’s running for Elizabeth Warren’s seat: http://t.co/fsbyE8Jnrr pic.twitter.com/8YjxjmsPMr

Mitt #Romney, the candidate America deserves, just not the one it needs right now.

Romney out. Wall Street has its candidate. pic.twitter.com/Q3OHktpqC1

Romney declines 2016 bid to focus on solving murders with his wife and gravelly-voiced butler.

Romney out of 2016 race: @MittRomney :”best to give other leaders in the Party the opportunity to become our next nominee.”

The good news about Romney running: Tim Pawlenty avoids getting his hopes up for a VP nod a third straight time.

Romney is the Harold Stassen of not running

Guess how many political reporters have emailed me pointing out that Bloomberg and The Daily Beast got Romney news wrong? a) 5 b) 7 c) 11

I knew we hadn’t lived good enough lives that we’d get to mock Romney for another cycle. New Romney jokes are easier than new Santorum jokes

I think the real takeaway from Romney’s decision not to run is that it puts us one step closer to a Bush vs. Clinton campaign.. Yikes

GOP politicos wondering why Romney took process so far, so publicly, to say no…

Never thought Romney was going to run in 2016. Have y’all not seen the ending of MITT? Great little doc by the way. pic.twitter.com/vVUHzjQtFp

Congratulations to Mitt Romney for finally saying something the American people want to hear.

Surprised Romney won’t run in 2016. He was my prediction to win the presidency but now I guess not.

.@JohnFugelsang Ann Romney has spoken. Now when do we hear the news from Trump’s wig?