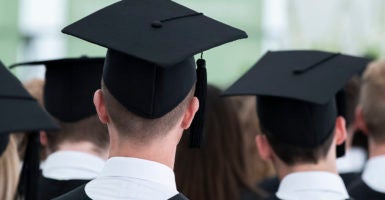 “You don’t talk about it.” That’s how one student at Washington University in St. Louis described being a conservative on campus. Drew McPike isn’t the only one who feels that way. Turns out, a shocking majority of young Republicans are hiding their views. Just as surprising is the reason: they don’t want their grades to suffer.

The College Pulse poll, the latest in a long line of evidence that higher education is anything but tolerant, found that almost three out of every four campus Republicans keep their party affiliation a secret to avoid retribution from their left-leaning professors. The question asked 1,000 co-eds: “Have you ever withheld your political views in class for fear that your grades would suffer?” Seventy-three percent of students who identity as “strong Republican” reported that they had, while 71 percent of students who identify as “weak Republican” said yes.

Of course, none of this should come as a surprise in a country where almost 40 percent of conservative students don’t even feel safe on campus. Another 55 percent don’t even tell their friends about their views. Compare that to the most liberal students, only 16 percent of whom bother to keep their opinions close to the vest. The fear of being ostracized is real — but only for one side. And that doesn’t just hurt Republican students, NRO’s Katherine Timpf points out, it hurts Democratic students as well.

“It’s true: Many college campuses are liberal echo-chambers, where liberal students and liberal professors are constantly reassuring each other of the correctness of the liberal position, without anyone ever exposing them to other points of view. This sort of environment will inevitably result in the liberal students who graduate from these colleges never having had the experience of defending their views or considering any others — which leaves them ill-prepared to engage politically in a real world that very much does include people who feel differently.”

Conservatives brave enough to talk about their views are stigmatized if they’re lucky, and physically attacked if they’re not. We’ve wiped campuses clean of so many words, ideas, and values that an entire generation is leaving college completely unprepared for the cruel world higher education is “sparing” them.

Liberals used to care about the free exchange of ideas — until theirs became impossible to defend. Now, they’ve decided they don’t want to try to win the debate. They want to stop the debate from taking place. A real educational environment welcomes the exchange of ideas and is secure enough in its beliefs to show respect to the other side. So many of these kids are graduating school saddled with debt. It’s a shame that our toxic culture is making them pay for their experience in other ways too.