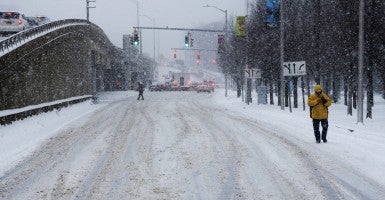 With the onset of another snowstorm hitting the Northeast, New Jerseyans are shaking their snow shovels at a federal law that causes them almost yearly fits. In 2014, New Jersey municipalities, in desperate need of salt to keep roads safe, wanted to buy the salt from willing suppliers in Maine. But thanks to a hundred-year old law, they could not find someone to legally ship the life-saving salt.

The “Merchant Marine Act of 1920,” better known as the “Jones Act,” effectively bans shipping between U.S. ports, unless the ship transporting goods is U.S. built, U.S. flagged and staffed by at least 75 percent U.S. crewmen. Irish, Canadians or Panamanians need not apply. As the U.S. merchant marine became concentrated into a handful of companies, the remaining shippers used their government-granted monopoly to drive up profits at the expense of other Americans. Though foreign companies already carry 80 percent of America’s international commerce shipping, at lower costs, Americans are still forced to utilize monopolist ships between domestic ports.

As of 2014, America had a grand total of 90 Jones Act-compliant ships to cover the Atlantic, the Pacific and all shipping from the continental U.S. to Alaska, Hawaii and Puerto Rico. But Congress has refused to allow international ships to serve shipping needs between American ports. When a timely shipment could save lives, the Jones Act stands in the way. If Congress wants an easy way to cut prices, strengthen the economy, practice common sense and keep roads safe, than it is time to sink the Jones Act.