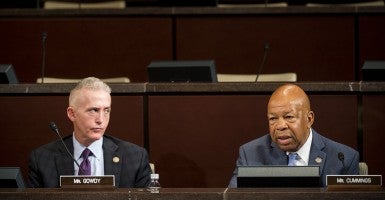 Some federal agencies continue to stonewall when it comes to the ongoing investigation into the Benghazi terrorist attacks, according to insiders familiar with the process. They say the House Benghazi Select Committee isn’t getting access to all relevant documents and witnesses.

That will be the topic of the committee’s first public hearing of 2015 called for Tuesday next week.

Most of the committee’s work since a (slightly) bipartisan vote created it May 8, 2014, has quietly focused on the massive task of gathering information. The committee has provided relevant federal agencies a list of several dozen witnesses it wishes to interview. But Republican staff members are encountering some of the same roadblocks that other committees met as they investigated pieces of the events surrounding the Sept. 11, 2012, terrorist attacks on U.S. facilities in Benghazi, Libya. Four Americans, including U.S. Ambassador Chris Stevens, died in the assaults.

One congressional official noted that some federal agencies, such as the Justice Department, appear to be working to comply with committee requests, engaging in productive negotiations over requested materials and access to witnesses. However, the official says that there are still outstanding issues with the Justice Department, and that other agencies, including the State Department and some in the intelligence community, have not been as cooperative.

The House resolution creating the committee authorized it to investigate all aspects of what happened in Benghazi, as well as looking at how to improve executive branch cooperation with congressional oversight. Tuesday’s hearing is part of the effort to obtain a complete record of the events before, during and after the attacks, on a timely basis.

The committee’s goal is to strike a balance between information and witnesses withheld for legitimate reasons of national or individual security—and the possibility that those reasons may be improperly invoked to prevent the release of information embarrassing or damaging to the Obama administration or former Secretary of State Hillary Clinton.

Much of the Benghazi committee’s work will be done in non-public interviews rather than public hearings. Committee Chairman Rep. Trey Gowdy, R-S.C., a former prosecutor, has said that format allows members and staff to spend “hours” with a relevant witness rather than having to ask questions in short, restricted bursts under the rules of a public hearing.

Democrats, including Rep. Elijah Cummings of Maryland, praised Gowdy’s measured approach last fall when he agreed to their request to have the first hearing be on their topic of choice: the Accountability Review Board’s recommendations and progress on implementing them.

>>> Still Digging for the Truth About Benghazi

“I sincerely hope the select committee will stay on the course of constructive reform and keep this goal as our north star,” Cummings said. “It would be a disservice to everyone involved to be lured off this path by partisan politics.”

Cummings did not respond to a request for comment for this article. An armed man waves his rifle as buildings and cars are engulfed in flames after being set on fire inside the US consulate compound in Benghazi late on Sept. 11, 2012. (Photo: Getty Images/Newscom)

Sen. Barbara Boxer, D-Calif., has called the continuing investigation into Benghazi a Republican “witch hunt,” and said there have been more than enough hearings and all questions have been answered.

When asked to comment on the impetus behind next week’s hearing, Gowdy said it would be a “reasonable inference that we would not be having a hearing to compliment [the federal agencies] on the speed with which they have complied with [our] requests.”

What happens if federal agencies simply refuse to provide documents to Congress, as they have done in the past?

It’s not clear there is much Congress can or will do about it.

One official said they could try to get help from Senate Republicans to exert pressure, or could figure out a way to use the federal funding process, which is in the House’s hands, to exert pressure. Among the many outstanding issues and questions the committee is expected to take on:

1) Interviewing key witnesses who have never yet appeared before any congressional committee.

2) Obtaining the elusive military “after action” report(s) that detail the military response and any issues encountered.

3) Piercing secret processes used by the Accountability Review Board in its investigation into the State Department’s actions.

4) Who was behind the administration’s decision to direct the narrative of the attacks as having been prompted by a YouTube video that caused a protest to spiral into violence?

5) Who wrote the original talking points and who was behind the edits and deletions before they were used by U.N. Ambassador Susan Rice when she appeared on Sunday network talk shows to discuss the attacks?

6) What did Rice know, and from whom, prior to her appearances on the programs?

7) Was there a State Department “document separation” operation designed to withhold embarrassing documents, as former Deputy Assistant Secretary of State Raymond Maxwell alleges? If so, who was behind it?

9) What light can former CIA Director Gen. David Petraeus shed on the events?