Government’s Obsession With Regulation Just Drove Uber Out of Austin 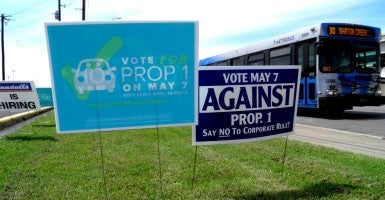 On May 9, residents of Austin, Texas, accomplished what many New York City regulators and legislators have tried in vain to achieve: they forced Uber and Lyft out of their city.

Over the weekend, a mere 17 percent of the voters went to the polls and a majority voted in favor of retaining restrictive and burdensome taxi-like regulations that city officials imposed on ridesharing companies in December.

In response, Uber and Lyft made good on a joint pledge to shut down their operations, leaving Austin with the dubious distinction of being the only major city in America without ridesharing services.

The motto of the Texas capital is “Keep Austin Weird,” and anti-ridesharing voters and cartel-like taxi interests have done just that.

Regulating What Doesn’t Need to Be Regulated

In December, the City Council of Austin passed an ordinance subjecting ridesharing companies (referred to as transportation network companies) to a series of regulations that treat innovative ridesharing services like century-old, calcified taxi companies.

Among other things, the ordinance specified the information that apps must display to passengers, required comprehensive data reporting to city officials, specified that vehicles feature government-approved “trade dress,” and restricted the dynamic pricing features that ensure passengers can always be paired with a driver.

But the portion of the new regulations that attracted the most attention was the mandate that companies like Uber and Lyft employ finger-based background checks when vetting potential drivers, despite scant evidence that the costly and burdensome requirement would be any better than the systems already employed by ridesharing companies.

Once someone is accepted as a driver on either platform, passengers can rate and review their performance. Prospective passengers can then see the driver’s aggregate rating and cancel trips if they are paired with a low-rated driver. The companies themselves can screen out poorly performing or dangerous drivers with greater exactitude than any traditional taxi service.

This approach won over Austinites, but not their elected legislators.

After the December vote, 65,000 residents—three times the legally required threshold—signed a petition in support of an alternative ordinance that would have undone many of the micro-managerial mandates. The City Council then had to choose between adopting the new plan, or holding a costly special election and putting the matter before voters.

For 80 years, city governments across the country have controlled virtually every aspect of the taxi industry. Government regulators set fares, restrict the number of drivers able to provide taxi services, and impose complicated licensing schemes.

For 80 years, city governments across the country have controlled virtually every aspect of the taxi industry.

All of this is for the benefit of the public, proponents insist, but nothing could be further from the truth. It is entrenched taxi interests, not the public or even most of the men and women who drive taxis, that benefit from government regulation of the industry.

How? By restricting the number of taxis allowed to operate in a city—in Austin, a mere 668 taxis are permitted to provide ground transportation services to a population exceeding 885,000—prices are driven incessantly upward, since demand always outpaces supply. This prompts governments to step in to regulate fares to “protect” the public, but the prices riders pay are always higher than they would be in a competitive market.

Austin’s anti-corporate voters may be surprised to learn that it is not the taxi drivers who capture these above-market profits—it is the entrenched taxi companies who get those. Drivers must pay a $50 daily fee to the taxi company that controls the city-issued permit they need to legally operate as a taxicab.

That’s right: Taxi drivers are expected to pay for the right to work, and they must pay a fixed rate whether they complete one trip or 15 trips that day. At the end of a six-day work week, one study found that a taxi driver in Austin can expect to net only $200 before taxes—a wage of less than $3 an hour.

Ridesharing represents the first genuine break from this corrupt arrangement in generations. These platforms afford entrepreneurial drivers a chance to earn a decent income, and riders gain access to a new, reliable, cheap, and safe means of getting around their city. Ridesharing companies are right to fight vociferously against their industry being dragged into this system.

Austin residents may have been taken in by catchy slogans like “Say NO to corporate rule!” but that is exactly what they voted for. By driving ride shares out of their city, Austinites have cast their support for a system that perpetuates a taxi cartel at the expense of drivers and the public.