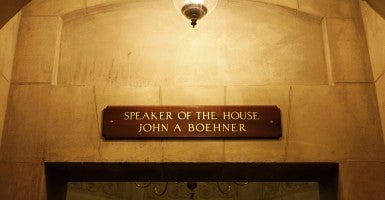 A sign over an entrance to the Speaker's Rooms in the United States Capitol building. (Photo: Getty Images)

Today, members of the U.S. House of Representatives elected Ohio Republican John Boehner to his third term as speaker of the House.

The nominations for the top House post from Republicans were Boehner, Ted Yoho and Daniel Webster of Florida and Louie Gohmert of Texas. Democrats nominated Rep. Nancy Pelosi of California.

“As speaker, all I ask is that we disagree without being disagreeable,” Boehner said after being elected. “It’s a real work. It’s a grind. The battle of ideas never ends and frankly never should. We Americans never quit. Let’s once and for all prove the skeptics wrong.”

“Let’s once and for all prove the skeptics wrong,” said @SpeakerBoehner upon being elected speaker of the House.

Of the Republicans casting votes, 24 did not vote for Boehner — the most “no” votes against a speaker in the last century. One voted “present.” Republicans needed 29 defectors to prevent Boehner from getting reelected.

Leading up to the start of the 114th Congress, Boehner was expected to be elected to his third term as the House’s No. 1 Republican. However, a late bid from Webster garnered support from conservative lawmakers.

Days before the speaker election, Gohmert and Yoho announced their bids to challenge Boehner.

Opposition to the Ohio Republican began in the days leading up to the start of the 114th Congress. A total of 15 GOP lawmakers said they would oppose Boehner.

Just 408 members of the House participated in the speaker election, lowering the number of votes needed to reach a majority from 218 to 206.

Close to a dozen lawmakers from New York missed the vote to attend former New York Gov. Mario Cuomo’s funeral today. With their absence, the number of members Boehner needed to support him lowered from 218.

Two years ago, a dozen conservatives protested Boehner as speaker and voted against him. However, this year showed a more coordinated effort as speaker-hopefuls formally declared.

The U.S. Constitution calls for the House speaker to be sworn in before any other business. Lawmakers began voting around 12:45 p.m.