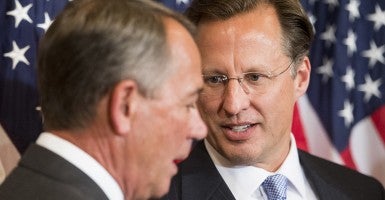 On the eve of the scheduled vote, a freshman congressman with tea party roots has emerged as a key player in rounding up fellow conservative Republicans to oppose House Speaker John Boehner’s bid for a third term in that top position.

A Republican aide familiar with the efforts of those opposing Boehner told The Daily Signal today that Rep. David Brat, R-Va., has been meeting with fellow lawmakers  in hopes of convincing them not to vote for Boehner, R-Ohio.

Brat replaced the House’s former No. 2 Republican, Eric Cantor, after defeating him in an unexpected primary upset. Cantor had functioned as Boehner’s chief deputy in the House’s GOP leadership.

>>> Congress Could Make History for First Time Since 1923

The 114th Congress is set to convene tomorrow afternoon with new Republican majorities in both the House and Senate. The election for House speaker — the first order of business in the lower chamber — is expected to be held around 12:40 p.m.

Over the past few days, 10 conservative lawmakers have come out in opposition to Boehner. Two of these Republicans — Louie Gohmert of Texas and Ted Yoho of Florida — announced their candidacies to replace him.

Besides Brat, the others include incumbents Jim Bridenstine of Oklahoma, Paul Gosar of Arizona, Walter Jones of North Carolina, Steve King of Iowa, Thomas Massie of Kentucky and Marlin Stutzman of Indiana. An incoming congressman, Gary Palmer of Alabama, today became the 10th.

Offices who oppose Boehner have been in touch with one another, a staff member for a conservative lawmaker told The Daily Signal. However, the staff member said, talks are focused on the Republican voters who have demanded a change in Washington, D.C.

A communications staffer to a conservative Republican, speaking on the condition of anonymity, told The Daily Signal that 20 GOP lawmakers have committed to voting for someone other than Boehner.

In an interview today with The Daily Signal, however, Bridenstine said he was not certain of the total number so far.

“There’s more out there than have already announced,” Bridenstine said. “I don’t know what the count is, but certainly it’s growing every couple of hours, it seems.”

Brat announced his opposition to Boehner yesterday in an op-ed for Breitbart News.

“In recent days and weeks, I have given careful consideration as to how I would cast my vote for speaker of the House,” Brat wrote, adding:

I do not cast this vote as an individual, but on behalf of the citizens of Virginia’s Seventh District who sent me to Washington to act as their representative. While I like Speaker Boehner personally, he will not have my support for speaker.

To remain speaker, Boehner needs to win a majority of those voting for a specific candidate, or 218 if all House members vote. To stop Boehner from winning that majority on the first ballot, 29 Republicans must oppose him.

Should the Ohio Republican fail to secure a majority, lawmakers would continue voting on a second ballot, and possibly more, until he or another candidate wins a majority.

In June, Brat upset Cantor, then House majority leader, in the primary election. Cantor resigned from Congress on Aug. 18.

An economics professor, Brat campaigned on conservative values that led him to oppose amnesty for illegal immigrants, what he calls reckless government spending and the Affordable Care Act — popularly known as Obamacare.

Pundits dubbed Brat a rising tea party star, an image that stands in sharp contrast to his “establishment” predecessor.