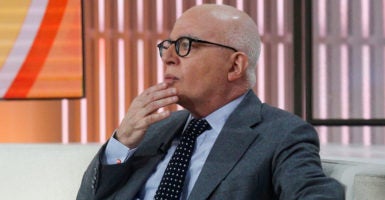 “She seems to have embraced it,” Michael Wolff, author of the discredited book "Fire and Fury," said of Nikki Haley’s response to rumors of an affair with President Trump. (Photo: Brendan McDermid/Reuters/Newscom)

During an interview with theSkimm, Wolff confronted Haley’s response to the rumor he started about her sleeping with the president.

“Or, she seems to me, she seems to have embraced it,” Wolff responded, suggesting Haley is using the rumor to her advantage. “All she does is hammer on this fact. I mean, if I were being accused of something, and I’m not accusing her of anything … she hasn’t tried to avoid this, let’s say.”

That’s simply not true. Wolff directly accused a woman in the Trump administration of having an affair with the president during an interview on HBO’s “Real Time with Bill Maher.” He didn’t go as far as to name Haley during the interview, but he left a trail of breadcrumbs for readers to obviously conclude that he was referring to Haley, and since then, has done nothing to deny that.

“You just have to read between the lines,” Wolff told Maher. “It’s toward the end of the book. … Now that I’ve told you, when you hit that paragraph, you’re gonna say, ‘Bingo.’”

During his interview with theSkimm Tuesday, Wolff deflected any blame.

“I can’t account for the way other people have read this book,” Wolff said. “If reporters then call her up and say, ‘I think you’re the one having the affair,’ I think you should get those reporters in here and ask them about that.”

Questions about Wolff’s accusations against Haley ended there, with theSkimm then turning the page to more generic questions about Wolff’s book. The pivot was similar to that on display at the Grammy Awards, where celebrities wearing #TimesUp pins on their gowns cheered on the reading of a book written by a misogynist author who days prior, publicly accused one of the nation’s most prominent women of sleeping her way to success.

This would never fly under the Obama administration. But when it comes to women who work for Trump, it seems that anything is fair game.

To set the record straight, Haley didn’t address the rumor about her sleeping with Trump until she was directly asked about it by Politico’s “Women Rule” podcast.

“The idea that these things come out, that’s a problem,” Haley said.

“But it goes to a bigger issue that we need to always be conscious of,” she added. “At every point in my life, I’ve noticed that if you speak your mind and you’re strong about it and you say what you believe, there is a small percentage of people that resent that and the way they deal with it is to try and throw arrows, lies or not.”

Haley was exactly right—if you’re a woman and you’re strong and you speak your mind, there will always be people like Wolff who resent you for that.

And as she so accurately predicted, Wolff doubled down when she fought back, throwing more “arrows” at the ambassador.

As if undermining the career of an Indian-American immigrant who’s now the ambassador to the United Nations wasn’t bad enough, Wolff is now on a campaign to humiliate her for having the courage to stand up for herself in the face of a misogynist man.

Feminists and their Democrat supporters who pretend they stand for women hardly denounced Wolff’s first charade, and thus far, have been silent on his latest.

Their silence is deafening.

More than 1.7 million Americans are buying into Michael Wolff. The media gave him a credible voice and is now giving him a free pass to degrade a woman’s career and perpetrate the stereotype that if you’re successful in life, you probably got there by spreading your legs. Oh, and if you’re like Haley who has the strength to condemn such accusations, you’re nothing more than an attention-seeking whore.

The entire country should be ashamed of this one. But because Haley is conservative, hardly anyone cares.

Update: Some members of the media started to respond as they learned of Wolff’s latest smear.