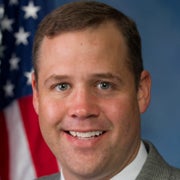 Jim Bridenstine represents the 1st District of Oklahoma in the U.S. House of Representatives.

The day after Republicans won the largest majority in the House of Representatives in almost 100 years and won a significant majority in the Senate, our liberal activist president claimed to hear the voices of all the people who didn’t vote. It was another example of stunning obstinacy from this president.

It seemed Democrats were melting down, Republicans were unified, and all we had to do was buy enough time to get our Republican reinforcements to Washington in January.

Like President Obama, Speaker John Boehner must have heard voices that didn’t vote.

Together, they crafted the CR/omnibus, a $1.1 trillion spending bill that funded the government for 10 months and blocked our newest elected Republicans from advancing conservative policy and delivering on campaign promises. With this vote, Republicans gave away the best tool available to rein in our liberal activist president: the power of the purse. The power of the purse is Congress’ constitutional strength.

For the next 10 months, the CR/omnibus will fulfill Obama’s ambition of creating an even larger constituency of dependency on Obamacare. The president’s goal has always been to create as much dependency as possible before enforcing the destructive employer mandate. The CR/omnibus hands the liberals that victory. This is unconscionable after watching the campaign rhetoric that won such decisive victories for the GOP.

Department of Homeland Security appropriations expire in February, when Republicans will supposedly fight to defund the illegal amnesty plan created by the president. Does anybody believe that Obama is concerned about Republicans not funding DHS? Immigration and Customs Enforcement agents have already sued the administration for not allowing them to enforce the law.

The Constitution requires the president to faithfully execute the laws of the United States. He has refused to enforce the laws on border security, Obamacare, illicit drugs and the release of detained terrorists. His activism in his last two years has accelerated to include executive amnesty, initiating international climate deals without a treaty, and establishing an embassy in Cuba without consulting Congress. When our Constitution is under assault and House Republicans give away our constitutional power of the purse, they share the guilt of abandoning our founding principles.

The CR/omnibus legislation sufficiently undermines the checks and balances enshrined in the Constitution that it warrants my pending vote against the speaker. John Boehner went too far when he teamed with Obama to advance this legislation. He relinquished the power of the purse, and with it he lost my vote.