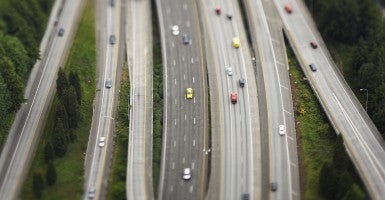 On Tuesday, they did it again. This time, they caved with the omnibus spending bill for fiscal year 2015 spending.

Higher spending levels emerged on a variety of programs that merit phasing-out or direct termination – not bumps in their capacity to spend.

The Transportation Investment Generating Economic Recovery, or TIGER, discretionary grant program is one example. These so-called competitive grants are actually politicized “administrative earmarks” that are awarded to road, rail, transit and port projects that are supposedly in the national interest.

Yet the grants have gone to pay for low-priority activities and projects only loosely related to transportation (in the modern sense of the term), such as streetcars and pedestrian walkways. These activities are inherently local, not national in nature. By funding them, the federal government is vastly overstepping its constitutional powers.

Originally the House proposed cutting TIGER Grants down to $100 million and making transit and passenger rail ineligible for funding—both long-overdue reforms. But the continuing resolution before Congress grants TIGER $500 million for the U.S. Department of Transportation to hand out like candy to local cities and interest groups. And it does away with the eligibility changes.

The House proposed cutting Amtrak’s budget by a couple hundred million dollars, but the Senate insisted and won its $1.390 billion funding level. Though this amount is the same as last year, meaning no increase was granted overall, as a first step Congress should have cut both operating and capital subsidies, to send a message that Amtrak needs to dramatically lower its operating costs and improve its financial performance. And, even though the bill requires Amtrak to report on reforms to stem losses on its food and beverage services, such a requirement is weak, and we’ve seen it before. Consistently, Amtrak fails to make necessary changes. A better solution would be to deny Amtrak a certain amount of funding if it continues to lose money on food and beverage sales.

The New Starts program also should have been on the chopping block, not given $2.12 billion in funding for fiscal year 2015. That amount was higher than the House proposal and, again, nearly as high as the Senate’s proposal. New Starts are for fixed guide-way projects, such as streetcars and subways. This limits otherwise more prudent use of the money by localities on more cost-effective bus systems. However, the federal government has no business spending general taxpayer dollars—that it is borrowing, no less—on local activities that have no national significance.

Congress has failed to make necessary reforms in transportation policy. It is a loss for taxpayers, a loss for good governance and a loss for credibility in the institutions involved.