7 Tips on How to Decipher the Omnibus Bill 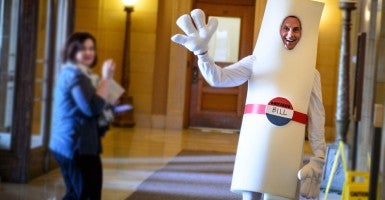 There are plenty of reasons to shout and pout about what’s happening in Washington this week.

The congressional elves who had all year to craft, debate and pass legislation to fund the government have failed to do so.  Now it’s crunch time, and they are throwing everything into Santa’s bag all at once.

It’s called an omnibus bill and it is ominous for the country.

As opposed to bills that are bite-size chunks, such as the 12 appropriation bills that cover individual agencies or small groupings of agencies, we get a single 1,000-plus-page bill, covering every nook and cranny of government, that somehow our elected officials are supposed to be able to review in a matter of 24 to 48 hours. This also leaves precious little time for anyone to make objections to this or that provision even if they have time to find them.

We’ve seen this show before.  Remember what “comprehensive” healthcare legislation got us – the unaffordable “Affordable Care Act” that was thousands of pages long and read by almost no one before it became law.

Now, just days away from the deadline to pass a year-end spending package to keep the government open and funded through 2015, here we are again.

This is not the way to handle America’s budget.  As my Heritage colleague Ed Corrigan, a 20-year veteran Hill staffer, says, “It’s like giving someone a copy of War and Peace and telling them there are five curse words in it and they’ve got one hour to find them.”

So how do you find the bad stuff in this bill?  Corrigan and the rest of team at Heritage will be working overtime to find and expose the good, the bad and the truly ugly in the bill.  Be on the lookout for their analysis right here on The Daily Signal.

But if you dare try it on your own, here are a few tips from Heritage experts:

1.  You likely won’t have time to read the entire bill, so start with the individual  appropriation committee reports that are the “treasure maps” of what will be in the final omnibus bill.

2. Be on the lookout for anything labeled “emergency designations.” Rarely are they emergencies and because they don’t count towards the overall costs of the bill, they are one of the easiest ways to get around spending caps.

3. Read the bill backwards.  The beginning of the bill is just the typical outlining of how much money each department will get.  All the “additional provisions” are inserted at the back of the bill

5. Keep a lookout for the naming of a state or locality in the bill – that is usually the sign of an earmark.

6. Surprisingly, there are actually attempts to incorporate funding restrictions in omnibus bills.  These are usually called “riders.” But not all restrictions are created equal, so search for the word “none of the funds” to find the good and the bad. An example of a good funding restriction would be language saying no money shall be used to fund Obama’s executive amnesty plans.  However, there likely will be attempts by liberals to restrict any funding for pro-life related activities.

7. Most of the bill will be written in legislative jargon and code, making it very hard to decipher and understand.  Read the Statement of the Manager at the top of the bill.  It will give you more information, and it’s written in English.

Corrigan has it right when he says, “This thing is a freight train and you never know what they are going to try and bury in it.”