CRomnibus Doesn’t Do Enough on Obamacare 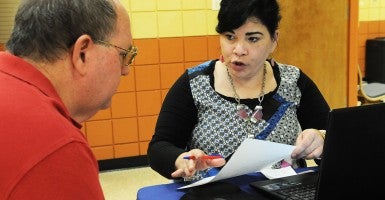 The CRomnibus funding bill introduced last night makes a few small changes to parts of Obamacare but the major aspects of the law remain unchanged. These changes do not go far enough and should not be a distraction from the larger spending provisions that are operating on autopilot: the Medicaid expansion and the government exchanges subsidies.

Risk Corridors. The CRomnibus funding prevents the use of appropriated and transferred funds to pay insurers in Obamacare’s risk corridor program.

However, it does not prevent using other funds in the Centers for Medicare and Medicaid Services (CMS) program management account to make risk corridor payments in excess of risk corridor receipts. The language allows the CMS Program Management account to receive and spend funds from other sources. Those other sources include: (1) Clinical Laboratory certification user fees (“section 353 of the PHS [Public Health Service] Act”); (2) user fees paid by MA [Medicare Advantage] and PDP [Prescription Drug Plans] plans to fund CMS enrollment administration (“section 1857(e)(2) of the Social Security Act”); and (3) “such sums as may be collected from authorized user fees and the sale of data.” Thus, CMS may still have ways to fund insurer “bailouts.”

In order to definitively prevent bailouts, Congress would need to adopt language that explicitly requires the Secretary to operate the risk corridor program on a budget neutral basis, as in the Rubio–Griffin bill (S. 2214/H.R. 4354).

IPAB. The CRomnibus funding bill cuts funding for Obamacare’s Independent Payment Advisory Board (IPAB) by $10 million. IPAB is a board of 15 appointed bureaucrats that is tasked with cutting Medicare spending if it exceeds a certain level. The board isn’t expected to be called upon for a few more years due to the recent slow-down in Medicare spending growth, and thus far, no one has been appointed to it.

But here, too, the small change doesn’t go far enough. There is bipartisan support for full repeal of IPAB.

Medical Loss Ratio. The bill also allows nonprofit health insurers (mainly BlueCross and BlueShield carriers) to count spending on “quality improvement measures” as “spending on medical care” when calculating the amount of premium revenues that they may keep to cover their administrative expenses under Obamacare’s Medical Loss Ratio (MLR) provision—something they are not currently allowed to do.

Separately, the bill also exempts expatriate insurance plans from complying with the MLR provision. Expatriate insurance plans provide coverage for Americans working in other countries, and are used by companies, religious missionary organizations, and charities that send American employees or volunteers to work in other countries. In many cases, those individuals work in locations that are remote or impoverished, which means that expatriate plans incur substantial administrative costs for providing those individuals with access to appropriate medical care—and thus, cannot possible meet the Obamacare MLR standards.

SGR and CHIP. This funding bill does wisely avoid addressing the reform of the sustainable growth rate (SGR), the payment formula for Medicare doctors, and the extension of funding for the Children’s Health Insurance Program (CHIP). These are two highly complex and consequential health policy issues that should not be legislated in a lame-duck Congress but dealt with in the next Congress.

Finally, these small changes are dwarfed by the two major Obamacare spending provisions that remain on autopilot—the Medicaid expansion and the government-exchange subsidies—together the Congressional Budget Office estimates to cost $1.8 trillion from 2014 to 2023.