Under Obamacare, Uninsured Rate Fell to Lowest Level in 50 Years. Why There’s More to That Number. 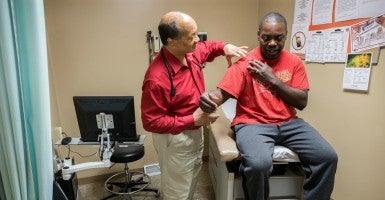 The percentage of Americans who are uninsured decreased to less than 10 percent of the population in the first three months of 2015. However, health care experts say the Medicaid expansion could have played a role in the drop. (Photo: Zbigniew Bzdak/TNS/Newscom)

Nearly two years after Obamacare’s implementation, a new survey found that the number of uninsured Americans decreased to less than 10 percent of the population in the first three months of 2015, which is the lowest level in the survey’s 50-year history.

However, experts say the change could be mostly attributed to the Obama administration’s expansion of Medicaid.

According to the survey from the National Center for Health Statistics, a division of the Centers for Disease Control, the number of people who were uninsured declined from 36 million in 2014 to 29 million in the first three months of 2015. Among adults between the ages of 18 and 64, the percentage of those who were uninsured dropped from 16.3 percent in 2014 to 13 percent in 2015’s first quarter.

The changes to the rate of uninsured come nearly two years after Obamacare’s implementation, which went into effect October 2013.

While the drop speaks to the mission of the health care law, Ed Haislmaier, a health policy expert, pointed to outside factors that affect the decrease in the number of uninsured Americans.

In an interview with The Daily Signal, Haislmaier, a senior research fellow in health policy at The Heritage Foundation, said that though it’s likely the Obama administration was likely “in the ballpark” for the changes in the number of uninsured, the survey had limitations.

Primarily, the government relied on answers from 26,121 respondents as opposed to an actual count, such as the number of people enrolled in health coverage, data that can be provided by health insurance companies.

“They’re trying to say how many people didn’t have coverage and extrapolate from that,” Haislmaier said.

Most notably, though, the survey failed to address an increase to the Medicaid rolls, which stemmed from Medicaid expansion created under Obamacare.

According to Haislmaier, Medicaid enrollment from January 2014 to March 2015 went from approximately 60.9 million to 71 million.

>>> Commentary: Why Obamacare Could Be Heading to the Supreme Court (Again)

According to the survey, the percentage of adults between 18 and 64 years old who were uninsured in states that expanded Medicaid fell from 18.4 percent in 2013 to 10.6 percent in the first quarter of 2015.

In states that opted against Medicaid expansion, the percentage of the uninsured fell from 22.7 percent in 2013 to 16.8 percent from January to March of 2015.

“Most of this is Medicaid,” Haislmaier said. “We know that for the first months of 2014, most of what happened in the private market wasn’t new coverage.”

The National Center for Health Statistics also looked at how the percentage of people who had public health plans, including Medicaid and the Children’s Health Insurance Program, and private plans, including employer-sponsored coverage and insurance purchased on the state and federal exchanges, has changed over time.

From 1997 to the first three months of 2015, the percentage of all Americans with public health coverage has increased steadily and has held at 34.6 percent from 2014 to March 2015.

However, the percentage of Americans enrolled in private health coverage decreased from 1997 to 2013, when it increased from 59.6 percent to 64.5 percent as of March 2015.

Though there has been an increase in the number of Americans enrolling in Medicaid after states adopted expansion, Nina Owcharenko, director of the Center for Health Policy Studies at The Heritage Foundation, said the quality of care provided to Medicaid recipients differs substantially from those receiving private insurance.

>>> Commentary: What States Can Do Now to Be Ready for an Obamacare Repeal