A Taxpayer’s Guide to the Lame-Duck Session 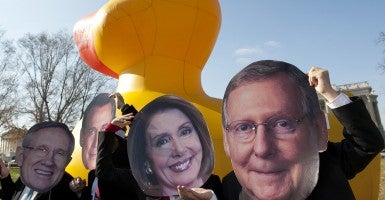 With two weeks left in the 113th Congress, lawmakers are scrambling to address a few key issues in their lame-duck session, most divisive being a bill to fund the government in the wake of President Obama’s unilateral action to allow millions of illegal immigrants to stay and work here.

In a speech yesterday on the Senate floor, Majority Leader Harry Reid outlined the upper chamber’s top priorities before Republicans take over in the new year.

Reid, a Democrat from Nevada, said he expects to see votes on an annual measure laying out priorities for the military budget, legislation extending the life of specific tax breaks and some important presidential nominations.

He warned colleagues, however, that they may have to remain in Washington until Christmas if they don’t reach compromises:

We have a lot to do, and there isn’t much time to accomplish it. I urge all senators to work hard to complete our work in a timely and efficient fashion.

Minority Leader Mitch McConnell, who will succeed Reid as majority leader in January, stressed the importance of Democrats and Republicans working together to dispense with the same items of legislative business.

>>> Report: Yes, Congress Can Stop Obama’s Immigration Moves With ‘Power of the Purse’

Here’s a rundown of what taxpayers can expect to see lawmakers tackle before leaving town for the holidays.

Before going home to campaign for the Nov. 4 midterm elections, Congress passed a continuing resolution to  fund the government until Dec. 11. Now, the House and Senate have little more than a week to pass legislation to keep the government running and prevent another suspension of nonessential functions—what the president and most Democrats call a “government shutdown.”

Lawmakers in the House and Senate could vote on an omnibus spending bill funding the government through the end of the fiscal year Sept. 30, 2015, or instead vote on a short-term “continuing resolution” that would expire early in 2015.

Republicans look to use the appropriations process to block Obama’s recently announced executive action on the immigration system. The president’s decision to go around Congress is expected to allow up to 5 million illegal immigrants to remain in the United States without fear of deportation and to apply for work permits.

Citing Congress’s constitutional “power of the purse,” Republicans floated the idea of drafting a spending bill that doesn’t include certain funding for the Department of Homeland Security needed to implement Obama’s changes. Lawmakers then would revisit funding for the agency early next year.

Republicans say they adamantly oppose another partial shutdown of the government, for which voters tend to give them the lion’s share of blame.

The House, where voters last month gave Republicans a bigger majority, should fight Obama’s executive action to give legal status to illegal immigrants, said Dan Holler, spokesman for Heritage Action for America, the advocacy arm of The Heritage Foundation.

“With more Senate Democrats expressing concern over the president’s actions, it would be political malpractice for the Republican-controlled House to pass a blank check for amnesty,” Holler told The Daily Signal. Focusing on tax breaks that expired in 2013, Republicans and Democrats struck a deal last month to permanently extend tax breaks for corporations, college students and residents of states with no income tax, including Reid’s home state of Nevada.

That deal, however, omitted extensions of the earned income tax credit and child tax credit.

Despite its bipartisan support, Obama last week said he would veto the package—an “unusual” move, according to the Chicago Tribune—because those two tax credits aren’t part of it.

Reid previously supported the deal with House Speaker John Boehner, R-Ohio. But a spokesman for the outgoing Senate majority leader told The Washington Post yesterday that he, too, was calling for inclusion of the earned income tax credit and child tax credit.

“Senator Reid would oppose any tax reform deal that doesn’t include extensions of the EITC and CTC,” spokesman Adam Jentleson said.

The House is expected to vote this week on a bill that retroactively would renew the other tax breaks for corporations and individuals for one year.

>>> Commentary: 9 Things Congress Definitely Should Not Do During Lame-Duck Session

Passing legislation to extend tax credits, though, does not boast a hard-and-fast deadline, as the government spending bill and annual defense measure, to an extent, do.

Expected to surface this week is a compromise version of the National Defense Authorization Act addressing military priorities important to Republicans and Democrats on the House and Senate armed services committees. However, The Hill reported, negotiations over benefits for service members are stalled.

The House passed a version of the defense measure, but the Senate has yet to do so.

Inclusion of nonessential items could see battle lines form, including a National Women’s History Museum proposed for the National Mall in Washington, D.C.

This year’s measure could include a formal authorization to arm and train Syrian rebels to fight ISIS, the brutal terrorist group in Iraq and Syria also known as the Islamic State.

Responding to the president’s stated intention to “degrade and destroy” ISIS, Congress in September approved the mission to help the “moderate” Syrian rebels as part of the short-term spending resolution that expires Dec. 11.

>>> Obama Wants to Stop Tomahawk Missiles. But the Navy Is Firing Them at ISIS