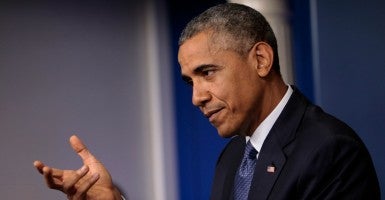 President Obama tonight announced he will begin to fix the nation’s broken immigration system by allowing millions here illegally to stay and to get work permits.

Obama did not specify a number, but the White House put it at about 5 million of the estimated 11.5 million illegal immigrants.

Obama said he decided to go around Congress and allow certain unlawful residents with established roots to “come out of the shadows” because mass deportation of illegal immigrants “would be both impossible and contrary to our character.”

“I know some of the critics of the action call it amnesty. Well, it’s not,” Obama said sharply, responding to critics who use that word to describe his unilateral actions.

“Amnesty is the immigration system we have today,” the president said. “That’s the real amnesty, leaving this broken system the way it is.”

The Obama administration intends to begin accepting applications for legal status and work permits this spring. The next president can undo the program.

“I know the politics of this issue are tough,” Obama said in his 12-minute address from the East Room of the White House (transcript here). “Most Americans support the types of reforms I’ve talked about tonight, but I understand the disagreements held by many of you at home.

“I hear those concerns,” he added in a speech that quoted both Moses and George W. Bush, but “immigrants are a net plus for our economy and our society.”

Here is the skinny on the president’s plan.

So, Mr. President, what’s the deal?

“If you meet the criteria, you can come out of the shadows and get right with the law. If you’re a criminal, you’ll be deported. If you plan to enter the U.S. illegally, your chances of getting caught and sent back just went up,” Obama said.

He insisted his actions are about “accountability,” not “amnesty.”

Who gets deportation relief?

First, illegal immigrant parents of U.S. citizens who have been in the country more than five years with no criminal record.

Obama didn’t specify, but the White House indicates this population could be granted deportation relief for three years “at a time” and be eligible for work permits after background checks and paying fees. They also must pay taxes.

Second, Obama intends to expand his existing 2012 program called DACA, or Deferred Action for Childhood Arrivals, for certain so-called “DREAMers” who were brought into the country illegally as children.

He will remove the age cap and expand eligibility to those who arrived in the U.S. as minors before 2010, instead of the current cutoff of 2007. He also will remove the requirement that applicants be under 31.

Highly skilled workers will be eligible for visas.

Who won’t be eligible for legal status?

Illegal immigrant parents of those who qualify under DACA and agricultural workers who are in the country illegally. Both groups had been rumored to be part of Obama’s plan.

What won’t these protected illegal immigrants get?

Access to Obamacare, food stamps or other federal benefits, the White House has suggested, nor a pathway to citizenship.

What else is involved?

Obama challenged Congress to pass a bipartisan immigration bill to replace his actions and “fix the whole system.”

The actions I’m taking are not only lawful, they’re the kinds of actions taken by every single Republican president and every Democratic president for the past half-century. To those members of Congress who question my authority to make our immigration system work better, or question the wisdom of me acting where Congress has failed, I have one answer: Pass a bill.

The Republican National Committee posted its own rebuttal video just hours before the speech.