Obama Wants to Stop Tomahawk Missiles in 2016. But the Navy Is Firing Them at ISIS. 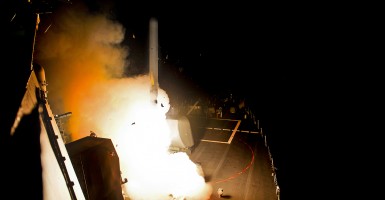 President Obama ordered the launch of 47 Tomahawk cruise missiles last Monday night from the USS Philippine Sea and USS Arleigh Burke, all aimed at targets in Syria as part of what he calls a military campaign to “degrade and destroy” the terrorist group ISIS.

However, the future of the Tomahawk program is threatened because of Defense Department budget cuts. The cruise missiles may not be produced at all for the Navy by 2016 – when America still could be fighting ISIS, brutal jihadists also called the Islamic State or ISIL.

“As we saw in this week’s airstrikes against ISIL, Tomahawk missiles are among the most valuable and precise tools in our military arsenal,” House Armed Services Chairman Buck McKeon told The Daily Signal, adding:

They provide unmanned, all-weather, deep-strike attack capability against both fixed and mobile targets, which makes them particularly useful against terrorist groups … that transcend nations and borders.

At 20 feet long and 2,900 pounds, Tomahawk missiles can be launched from both surface ships and submarines,  the Navy says, and travel at 550 miles per hour. The weapon, which has wings that fold out, is powered by a jet engine.

Historically, the Pentagon has purchased roughly 200 Tomahawks a year from manufacturer Raytheon, at about $1.4 million per missile. But Obama slashed that number to 100 for all of 2015 – just double what the Navy fired into Syria in one day.

The Navy has 4,000 Tomahawks stockpiled. That supply would last roughly 80 days if 50 Tomahawk missiles were fired daily, as they were Monday. Pentagon officials have warned that waging war with ISIS could last years.

“This sure ups the cost of the action,” @SBucci says.

It is interesting that after making the decision to close down the Tomahawk production line as a part of cutting defense spending, the Obama administration relies on them to kick off their Syria strikes. This sure ups the cost of the action, as the missiles will really have no replacement.

As part of plans to pare Pentagon spending, Obama proposed $118 million in cuts to the Tomahawk program in 2015.  Procurement of the missiles is to be eliminated by the following year, budget documents from the Navy show — five years earlier than the president proposed in his 2014 budget.

>>> Raw Footage of First U.S. Strikes Against ISIS in Syria

“We had been sustaining a 200 Tomahawk-per-year rate,” Navy acquisition executive Sean Stackley told DoD Buzz in March. “In 2015, we’ll drop down to 100. In 2016, we will revisit the question of whether the time is right to stop production of Tomahawks.”

The president called on the Pentagon to find a replacement for the cruise missile within a decade.

[Article continues after infographic below.] As a result of sequester cuts that went into effect in 2013, the Department of Defense faces $1 trillion in decreased spending through 2021. The cuts have left top Pentagon officials scrambling to determine where to decrease funding.

Despite the reduced spending outlined in Obama’s budget, key House and Senate committees joined in calling for a boost in missile production beginning in 2015.

During markups of the National Defense Authorization Act for fiscal 2015, the armed services committees in both chambers supported continued production of Tomahawk missiles.

In the Senate Armed Services Committee’s revision of the NDAA, lawmakers allocated an additional $276.3 million to maintain a rate of 200 per year.

“This is a prime example of the dangerous cuts our military leaders are forced to consider.”-@BuckMcKeon

Unfortunately, this is a prime example of the types of dangerous cuts our military leaders are being forced to consider under the new sequestration budget regime. It is my hope that the next Congress will reverse defense sequestration and ensure that vital national security programs like the Tomahawk system are adequately funded.

“This is really rolling the dice, in my view,” McCain told Secretary of the Navy Ray Mabus, “when we haven’t even begun the assessment of what a new weapon would look like.”

>>> Armed Services Chairman on Obama: ‘Our Foreign Policy Is a Mess’

Mabus, though, argued the current supply of Tomahawks would be “sufficient” to “carry us through any eventuality that we can foresee.”

Mackenzie Eaglen, a defense analyst at the American Enterprise Institute, said the Obama administration’s campaign to “degrade and destroy” ISIS could change the outcome of the Tomahawk program proposed by Obama.

“The caveat for ending the program next year, by the Navy, was always that there would be no unanticipated events that would drain current stockpiles of Tomahawks before a new missile is ready,” Eaglen told Marketplace.

In an April paper for The Heritage Foundation before the rise of ISIS, Bucci and another foreign policy expert,  Ted Bromund, advised against stopping the Tomahawk program in 2016, calling it “an error in both defense strategy and alliance policy.”

Citing Mabus’ defense that the current stock was adequate for the foreseeable future, Bucci and Bromund argued that most U.S. military operations “are not foreseen.”

At the start of the Iraq War in 2003, for example, coalition forces fired upward of 725 missiles, accounting for one-third of the entire inventory.

Eight years later, in 2011, the United States and the United Kingdom launched more than 160 Tomahawks in the opening days of the campaign in Libya.