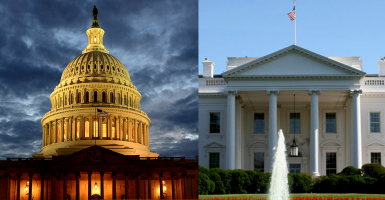 Congress may refuse to appropriate fees the White House wants to use to pay for its immigration moves, a report says. (Photos: Newscom)

Congress may use its “power of the purse” to block President Obama’s executive action on illegal immigrants, a prominent legislative and policy authority on Capitol Hill concludes.

The new report from the Congressional Research Service says that the House Appropriations Committee was incorrect last week in saying the government agency most responsible for implementing Obama’s action—  U.S. Citizenship and Immigration Services — cannot be defunded by Congress.

The House spending committee reasoned that Citizenship and Immigration Services operates on revenue it generates through immigration applications, so it doesn’t use congressionally appropriated funds to pay for activities such as issuing legalization status and work permits.

But the Congressional Research Service concludes that Congress still must appropriate the funds received from fees if the money is to be spent lawfully.

The Daily Signal obtained a copy of the report, prepared for Sen. Jeff Sessions, R-Ala., ranking minority member of the Senate Budget Committee. It says:

Still, CRS warns that lawmakers must be precise in the legislative language they use if they decide to prohibit agency spending to carry out the president’s changes to the immigration system.

The context in which a restriction on funds collected through fees or otherwise made available is enacted will determine which agencies or activities will be subject to that restriction. It is at least a theoretical possibility that a court could find that such a restriction reached activities or agencies that were entirely fee-funded.

Sessions has vowed to use the budget process to fight Obama’s moves to provide legal status for up to 5 million immigrants here illegally, allowing them to stay and obtain work permits.