Wicker: Coca-Cola, MLB, and Everyone Spreading Lies About Georgia Voting Law Should Be Ashamed of Themselves 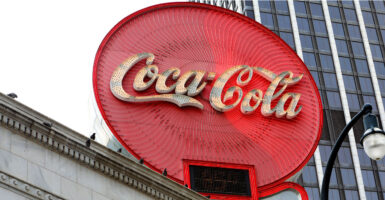 Coca-Cola and Delta have condemned Georgia’s voting law, and Major League Baseball has decided to punish Georgia by moving this year’s All-Star Game out of Atlanta. Pictured: A Coca-Cola sign stands atop the Olympia Building downtown in Atlanta. (Photo: Raymond Boyd/Getty Images)

Roger Wicker is the senior U.S. senator for Mississippi and the ranking member of the Senate Committee on Commerce, Science, and Transportation.

Mark Twain observed that “a lie can travel around the world and back again while the truth is lacing up its boots.” Today, powerful voices seem determined to prove him right.

In recent days, prominent members of the media, government, and big business have spread a wildfire of misinformation about a newly passed voting law in Georgia. Critics have panned the law as “Jim Crow 2.0” and “voter suppression.” President Joe Biden has denounced it as “un-American.”

Corporate executives have piled on as well. The CEOs of Atlanta-based Coca-Cola and Delta have condemned the legislation, and Major League Baseball has decided to punish Georgia by moving this year’s All-Star Game out of Atlanta—a decision MLB’s former commissioner, Fay Vincent, called a “serious mistake.”

If these individuals actually took time to read the bill, they would learn that it makes voting easier in Georgia, not harder.

The law expands the window for early voting, allows no-excuse mail-in voting to continue, adds 100 new ballot drop boxes, and allows voters to get a government-issued ID at no charge. It also makes elections more transparent by prohibiting ballot counters from stopping the count in the middle of the night.

The idea that these changes are somehow akin to the oppression of Jim Crow is a complete falsehood designed to inflame divisions in this country. Those who have spread this lie should be ashamed of themselves.

Corporations have historically shied away from controversy to avoid alienating their customers, yet today they seem convinced that bowing to far-left intimidation is good for business.

Coca-Cola, for example, was initially silent on the Georgia bill until activists staged a “die-in” at its Atlanta headquarters and liberal sportscaster Keith Olbermann began pushing for a boycott of Georgia products.

Once Coca-Cola fell in line, leaders from more than 100 other companies joined in a moral posturing stampede by releasing a vaguely concerned statement.

This is not the first time corporations have hijacked our political debate. In 2019, Disney, Netflix, and Warner Media threatened to boycott Georgia after state representatives passed a law protecting unborn life. Soon afterward, 180 corporate executives signed an open letter opposing these pro-life protections, calling them “bad for business.”

To their great credit, Gov. Brian Kemp and state lawmakers stood firm and refused to undo these protections, which reflected widely held convictions in Georgia.

Unfortunately, corporate bullying has sometimes succeeded. In 2015, when Indiana passed a religious freedom law on par with 19 other states, corporate backlash was fierce. The NCAA even threatened to move basketball games out of Indiana.

Lawmakers soon caved by passing a “fix” that reversed many of the bill’s protections. A similar case played out in Georgia in 2016, when then-Gov. Nathan Deal vetoed a religious freedom bill under massive corporate pressure.

It is revealing that the same companies pushing the made-up “voter suppression” narrative are making billions in communist China, a country that is actively committing genocide, persecuting Christians, and does not even pretend to hold elections.

Coca-Cola owns nearly half of China’s soft drink market. Delta recently upped its number of flights to China. Disney theme parks have popped up in Shanghai and Hong Kong. And the NBA—which gladly promotes social justice messages on the court—makes sure that owners and players never criticize the communist state, which is a huge source of profit for the NBA.

Americans see this hypocrisy for what it is: corporate elites who will do and say anything to help their bottom line, regardless of the truth.