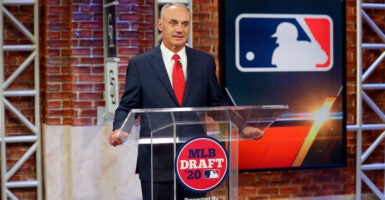 Republican lawmakers are pushing back against Major League Baseball’s decision to pull the All-Star Game from Atlanta because of Georgia’s new election law based on discredited claims that it suppresses voting.

In a letter Monday, Sen. Marco Rubio, R-Fla., asked MLB Commissioner Rob Manfred whether the league would give up doing business in China or Cuba, both communist nations that don’t have free elections.

“Taking the All-Star Game out of Georgia is an easy way to signal virtues without significant financial fallout,” the Florida Republican wrote to the baseball commissioner. “But speaking out against the Chinese Communist Party would involve a significant loss of revenue and being closed out of a lucrative market.”

To do so would require a personal sacrifice, as opposed to the woke corporate virtue signaling of moving the All-Star Game from Atlanta.

Major League Baseball’s business in China—known for its repressive communist government—was also a concern for Sen. Tom Cotton, R-Ark., who asked, “Hey @MLB, how many days of early voting are allowed in China?”

During an interview Monday on CNBC, Cotton talked about why corporate CEOs are facing pressure.

“I think they’re afraid of left-wing attacks, and they’re afraid of being attacked on cable news and in the newspapers that they read,” Cotton said. “They’re worried about … the very activist, young, social justice warriors they have working in their corporate headquarters. But I can tell you, these CEOs do not speak for their entire workforce.”

Georgia’s new law expands weekend voting, provides new voting machines and personnel for voting precincts with more than 2,000 residents, requires voters to fill in their driver’s license number or other state identification on an absentee ballot as a form of voter ID, and restricts campaign workers from handing out food or drink to voters standing in line 150 feet from a voting location.

Supporters of the law say it protects the integrity of elections, but opponents call it “voter suppression.”

The baseball commissioner said in a formal statement, “Major League Baseball fundamentally supports voting rights for all Americans and opposes restrictions to the ballot box.”

However, Manfred did not address what part of the new law he believed restricted voting.

A fact check by The Washington Post gave President Joe Biden four Pinocchios—its highest rating for a lie—for his rhetoric about the Georgia law.

Nevertheless, Biden has continued to call the law the “Jim Crow of the 21st Century” or “Jim Crow on steroids.” The president presumably meant the law was in some way worse than post-Civil War laws in the South that promoted segregation in schools and public accommodations as well as allowed lynching and other violence against black Americans. These laws also included poll taxes, literacy tests, and other overtly racist tactics to prevent blacks from voting.

Rubio’s fellow Florida Republican, Sen. Rick Scott, also noted in a tweet that Major League Baseball executives are “hypocrites,” noting that the league played in Cuba, “where the brutal Castro Regime murders its own citizens and denies them basic human rights like freedom of speech and free elections.”

Rep. Jeff Duncan, R-S.C., announced that he had directed his staff to draft legislation to revoke Major League Baseball’s exemption from antitrust laws.

Antitrust laws are designed to prevent one company—or group of companies acting collectively—from gaining too large a market share in one industry.

Major League Baseball has been exempted from antitrust laws based on a 1922 Supreme Court ruling that carved out an exemption to the Sherman Antitrust Act of 1890 for the league.

The National Football League, the National Basketball Association, and other professional sports leagues do not enjoy the same exemptions.

“It’s time for the federal government to stop granting special privileges to specific, favored corporations—especially those that punish their political opponents,” Lee wrote in a retweet of Duncan.

Cruz also tweeted out a link to Major League Baseball’s corporate sponsors, asking: “Do all of them oppose voter ID? Are all of them willing to be the woke enforcers of the corrupt Democratic Party?”

These are MLB’s corporate sponsors, who pressured to pull the All Star game out of Atlanta.

Do all of them oppose voter ID?

Are all of them willing to be the woke enforcers of the corrupt Democratic Party?

And do all hate the 75m who voted for Trump? https://t.co/cuOXYFO9Gv

Georgians—and all Americans—should fully understand what the MLB’s knee-jerk decision means: cancel culture and woke political activists are coming for every aspect of your life, sports included. If the left doesn’t agree with you, facts and the truth do not matter.

Rep. Ilhan Omar, D-Minn., claimed during a CNN interview that the Georgia law suppresses the vote.

“So our hope is that, you know, this boycott will result in changes in the law because we understand that when you restrict people’s ability to vote, you create a democracy that isn’t fully functioning for all of us,” Omar said. “If we are to continue to be a beacon of hope for all democracies around the world, we must stand our ground.”