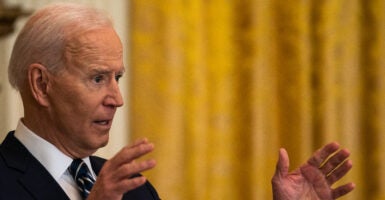 President Joe Biden, his fellow liberals, and his friends in the national news media are purposely—and cynically—misrepresenting Georgia’s new election reform law, and it’s a key part of a far-reaching strategy that stretches well beyond the borders of the Peach State.

They are dishonestly attacking the Georgia legislation as a throwback to the Jim Crow era, while simultaneously assailing the Senate filibuster as “racist” as well.

Those are two vital elements of the grand plan to ram the federal election-takeover legislation, HR 1, the euphemistically titled “For the People Act,” through Congress.

The true intent of the legislation—and the road map to get it to Biden’s desk—is to weaken election security and to cement liberals’ hold on power for decades.

Biden led with the false charge that Georgia’s new law “makes Jim Crow look like Jim Eagle.” (This bizarre simile left many people confused, but may have been an attempt at comparing an actual crow with the bigger, stronger eagle.)

The comparison is egregious, as the real Jim Crow laws legalized discrimination and racial segregation in education, employment, public facilities, the judicial system, and even cemeteries, among other areas.

Undeterred, Biden and his media amplifiers have hysterically shouted that the bill forbids giving food and water to voters waiting in line, conjuring images of people keeling over from dehydration.

Nor does Georgia limit voting hours or early voting, as Biden and others have claimed. Polling places may still remain open from 7 a.m. to 7 p.m. in Georgia, and early voting was, in fact, expanded. The law adds an extra mandatory Saturday for early voting and even writes into law for the first time that Sunday voting is permitted.

Not to be outdone in the hysteria department, New Jersey’s Democratic governor, Phil Murphy, announced that he would appear with election-security opponent Stacey Abrams to sign his state’s new voting law, which allows fewer early-voting days than Georgia now does.

Predictably, Murphy referred to Georgia’s more generous law as something from the “Jim Crow era.”

Since 2008, Georgia has required voters at the polls to show identification, and the new law expands that to those requesting absentee ballots.

The state will provide a free photo ID to anyone who needs one. Many other documents will suffice, however: utility bills, bank statements, paychecks, government checks, or any other government document that displays the voter’s name and address.

Polls consistently show that more than three-quarters of Americans favor voter ID laws, so this is hardly a controversial requirement or an undue burden on anyone.

Finally, critics say Georgia is limiting the number of ballot drop boxes, equating that to the total disenfranchisement of thousands of people, primarily black voters. Ignored is the fact that drop boxes were used in Georgia for the very first time in 2020 and then only because of the coronavirus pandemic.

The law now actually requires the availability of drop boxes, when no such mandate existed before.

Nonetheless, The New York Times—in a supposed “news” article—railed that the Georgia legislation constituted “new barriers” having an “outsize impact on black voters.”

While the hyperbole and naked misrepresentation of Georgia’s new law is taking place, a similar effort is underway attacking the Senate filibuster on a parallel track.

Simply put, the filibuster protects the rights of the minority party in the Senate by requiring 60 senators to agree to advance a measure to a final vote.

In 2005, then-Sen. Joe Biden defended use of the filibuster as a means to “compromise and moderation.” When he was in the minority, now-Majority Leader Sen. Chuck Schumer, D-N.Y., weaponized the filibuster frequently and robustly to thwart then-President Donald Trump’s agenda.

But now that the Senate is divided 50-50 between Republicans and Democrats, with Vice President Kamala Harris breaking tie votes, liberals say the filibuster must go.

And what better way to attack it than to call it “racist”? Just like the Georgia voting law.

Forgotten were the very many and very recent uses of the filibuster, which have been replaced solely by a recounting of the times it was used to block passage of civil rights legislation and in other shameful periods of American history.

To be clear, the parliamentary maneuver absolutely has been used in the past for racist and nefarious purposes. But in reading the news coverage of today, an uninformed observer would think that has been its only function.

Biden now calls the filibuster a “relic of the Jim Crow era,” despite his previous support of the tactic. Sen. Elizabeth Warren, D-Mass., now says it has “deep roots in racism,” even though she participated in a filibuster in 2020 to block a police reform bill authored by Sen. Tim Scott, R-S.C.—who just happens to be black.

Getting in on the act, Salon published a story calling the filibuster “the politics of white supremacy.” CNN ran what was supposed to be a primer on the filibuster under a headline calling it “a relic of our racist past.”

These are twin attacks—against the Georgia election law and against the filibuster—with the end goal of justifying and forcing through HR 1, the radical, leftist overhaul and federalization of elections.

Liberals see this as the path to guaranteeing electoral dominance for years into the future.

HR 1 would effectively ban voter ID laws and severely hamper the ability of states to verify the eligibility of voters. It would force automatic voter registration through government databases, such as the Department of Motor Vehicles and public assistance offices, without sufficient safeguards against noncitizens or other ineligible voters becoming registered.

It would also block the cross-checking of voter rolls across different states to prevent people from registering more than once. It also violates the First Amendment by restricting protected political speech and activities.

There’s no chance that HR 1 will attract the 60 votes needed to overcome a filibuster. Therefore, liberals say, the filibuster must be eliminated to achieve their objective.

At first glance, it may seem that the fight over the election laws of one individual state is unconnected to disputes about an arcane Senate procedure in Washington. But make no mistake: They are intertwined, and liberals hope they lead to their dream of a permanent majority.