The Left’s ‘Jim Crow’ Rhetoric Is Absurd, Insulting, and Dishonest 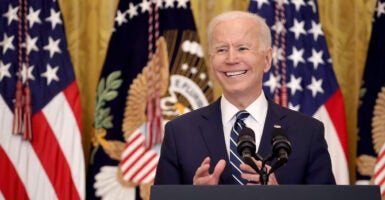 President Joe Biden called Georgia’s efforts to improve election integrity “Jim Crow in the 21 century” during the first news conference of his presidency on March 25. This slur is completely absurd and dishonest. (Photo: Chip Somodevilla/Getty Images)

The obnoxious—and patently false—attacks on Georgia’s new election reform bill, which compare it to the hideous Jim Crow laws of the long-gone “Old South,” are absurd. They are also insulting to those who actually were kept from registering and voting decades ago.

The polemical taunts are directed toward two of the bill’s provisions, one that extends the state’s decade-old ID requirement to absentee ballots and another that attempts to prevent campaigns and party activists from trying to corruptly influence voters by providing them with money, gifts, food, and water in polling places.

The critics don’t seem to have actually read the bill or understand that similar provisions already exist in federal law.

Let’s take a look at the first provision, which requires voters to provide an ID to receive an absentee ballot.

Georgia has had a law in place since the 2008 presidential election that requires a voter to show a government-issued photo ID when he or she votes in person.

When a federal judge threw out the lawsuit against the law in 2007 (amid similar “Jim Crow” comparisons), he specifically noted that in two years of litigation, the challengers could not produce a single resident of the state who would be unable to vote because of the new ID requirement.

Georgia provides a free photo ID to anyone who doesn’t already have one. We have more than a decade’s worth of Georgia’s turnout data in election after election that graphically shows that the ID provision does not prevent anyone—including minorities—from voting. Simply extending the ID requirement to absentee ballots is a much-needed, commonsense reform that voters support.

But what does the provision actually say? Section 25 of the bill doesn’t even require voters to provide a photocopy of their ID. Instead, the voter can simply write “the number of his or her Georgia driver’s license or identification card” on the application for the absentee ballot.

Moreover, if the voter doesn’t have such a Georgia ID card, she can “provide a copy of a form of identification listed” in another code section of Georgia law (§ 21-2-417(c)).

And what does that code section say? That you can satisfy the ID requirement with a “copy of a current utility bill, bank statement, government check, paycheck, or other government document that shows the name and address of such elector.”

Now, where do you think the Georgia Legislature got that language? It got it from federal law, the Help America Vote Act of 2002.

Section 303(b) of this law (codified at 52 U.S.C. § 21083) requires an individual who registered to vote by mail and who is voting for the first time in a federal election (whether in person or by mail) to instead provide “a copy of a current utility bill, bank statement, government check, paycheck, or other government document that show the name and address of the voter” if he doesn’t have a “current and valid photo identification.”

The language on voter IDs for absentee ballots in the new Georgia law is thus identical to the language in federal law, promulgated through the Help America Vote Act.

And guess who voted to approve this federal law in 2002? Why, then-Sen. Joe Biden of Delaware. In fact, the vote was 92 to 2, and included in the “yes” votes were Sens. Dianne Feinstein, D-Calif.; Dick Durbin, D-Ill.; Harry Reid, D-Nev.; and Patrick Leahy, D-Vt.

Were they all imposing “Jim Crow” on American voters? I don’t seem to recall the Major League Baseball Players Association boycotting any of the states of these senators—or any of the other senators who voted in favor of the Help America Vote Act. Or boycotting its own stadiums, which require IDs to pick up will call tickets.

The second provision in question prevents food and water to be given to voters waiting at the polls.

Like almost every state, Georgia prohibits electioneering inside or within 150 feet of a polling place or within 25 feet of any voters waiting in line to vote. The prior law prohibited the solicitation of “votes in any manner or by any means or method, nor shall any person distribute or display any campaign material” within such distances.

Section 33 of the new bill simply added “nor shall any person give, offer to give, or participate in the giving of any money or gift, including, but not limited to, food and drink, to any elector” within such distances.

In other words, a candidate and his campaign staffers can’t show up at a polling place with a truckload of pizzas and sodas and start giving them to voters standing in line. The clear intent here is to prevent campaigns, candidates, and political operatives from unduly influencing or bribing voters with money or gifts, including food and drink.

Similarly, federal law (52 U.S.C. § 10307) also prohibits paying or offering to pay anyone to register to vote or to vote. In fact, this ban was part of the original Voting Rights Act of 1965.

According to the U.S. Justice Department’s handbook on “Federal Prosecution of Election Offenses,” this statute has been broadly interpreted to apply to “anything having monetary value, including cash, liquor, lottery chances, and welfare benefits such as food stamps.”

The idea that Georgia is somehow doing something nefarious by preventing gift-giving at the polls is bizarre and ignores the unfortunate, long history we have of this type of corruption and undue influence being used in our elections.

By the way, unmentioned in the hysterical criticisms is new language making it OK for poll officials to make “self-service water from an unattended receptacle” available to “an elector waiting in line.”

The Georgia bill that was just signed into law by Gov. Brian Kemp has many provisions intended to protect the security and integrity of the election process, not prevent eligible individuals from voting or from succumbing to thirst while waiting in line to vote.

You have to have both access and security in elections and the criticisms of Georgia are intentionally misleading, shortsighted, and show remarkable ignorance of how voting and elections are actually conducted.