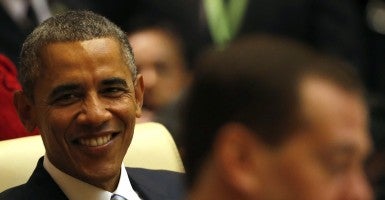 The election results were a crushing political blow for the Obama administration, giving Republicans firm control of both houses of Congress for the final two years of his term. But this in no way signals the end of the president’s policy agenda. It simply shifts the action to regulatory agencies.

In the days since the vote, this has already begun. Obama is moving forward with his immigration plans, and pushing his appointees on the Federal Communications Commission for stronger Internet regulation. While most modern presidents have routinely ended their terms by unspooling red tape, the regulatory hyperactivity of this administration may take the tactic to new levels.

President Obama has hardly been shy about his intention to use administrative action to bypass Congress. In this year’s State of the Union address, he vowed to wield his executive powers when faced with congressional resistance to his legislative agenda: “America does not stand still – and neither will I,” he said. “So wherever and whenever I can take steps without legislation … that’s what I am going to do.”

It’s not a new strategy for the administration. According to our count, regulators issued 157 new major rules during Obama’s first five years at a cost to Americans approaching $73 billion annually, likely making the administration the most regulatory in history.

And there are many more regulations in the pipeline; agencies have identified 124 additional major rules they intend to work on going forward. (A “major” rule is defined as one expected to impose costs on the private sector of at least $100 million annually.)

Among these are dozens of Dodd-Frank rulemakings. Despite the prodigious output of financial-service regulators since 2010, a backlog of hundreds of rules is waiting to be written. As of Oct. 1, a total of 280 Dodd-Frank rulemaking deadlines have passed, of which four out of 10 have been missed. Regulators have not yet released proposals for about a quarter of the rules.

Rulemaking for Obamacare also is ongoing, including menu-labeling requirements for which compliance will require an estimated 10 million hours of work by private-sector firms. As proposed, chain restaurants and vending-machine operators will be required to disclose “in a clear and conspicuous manner” myriad specific nutrition information for each of their offerings – including the buffet.

Officials of the Occupational Safety and Health Administration are completing rulemaking on a new exposure standard for crystalline silica (fine particles of sand common to mining, manufacturing and construction). One industry analysis submitted to the Office of Management and Budget estimated compliance costs of $5.5 billion annually, the loss of 17,000 “person-years” of employment, and $3.1 billion of economic output each year.

Perhaps the most worrisome new rule is being developed by the Federal Communications Commission. The one Obama is pressuring them to adopt would subject Internet service providers to comprehensive regulation of transmission flows, turning these firms into 1930s-style public utilities. That would be a disaster for the Internet and its users.

Congress must protect both its constitutional prerogatives and the welfare of individual Americans against the final regulatory push by the administration. It also must act defend against regulatory overreach in the future. Job One in this regard is adoption of legislation requiring congressional approval of new major regulations.

Congress, not regulators, should make the laws, and should be accountable to the American people for the results. To ensure this, no major regulation should be allowed to take effect until Congress explicitly approves it.

Other reforms are needed as well. The Congressional Budget Office should conduct regulatory impact analyses on all new legislation before it is voted on. A sunset date should be established, under which new rules expire unless they are reaffirmed. So-called “independent” agencies such as the FCC and Securities and Exchange Commission should be subjected to the OMB regulatory review process from which they are currently exempted.

This election will likely prompt the escalation rather than the end of the red tape flood. Without decisive action by Congress, the costs of red tape will continue to grow, and average Americans will be the victims.