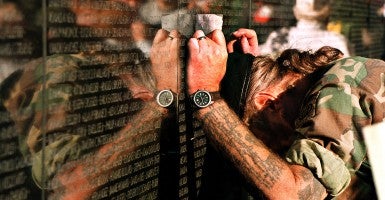 Doc Sorenson of Stanton, Virginia leans his head against the Vietnam Veterans Memorial. He made a rubbing of Lloyd Miller, a friend of Sorenson's brother. (Photo: Pete Souza/Newscom)

Thirty-two years ago today, after a week of honoring American veterans, the Vietnam Veterans Memorial was dedicated in Washington, D.C. With more than 4 million visitors each year, the Vietnam Memorial is a beautiful tribute to the heroes of the Vietnam War. A child’s silhouette is reflected on the surface of the Vietnam Veterans Memorial Wall. (Photo: Getty Images)

On the anniversary of the memorial’s dedication, check out our collection of photos and facts below.

1) Just steps from the reflecting pool and Lincoln Memorial on the National Mall sits the Vietnam Veterans Memorial Wall—free to visit and always open. The wall is made up of two parts, each 246.75 feet long. The black granite is from Bangalore, India.

3) No federal funds were used to construct the wall. Thanks to private contributions from individuals, corporations, veterans and other organizations, the Vietnam Veterans Memorial Fund raised almost $9 million. Drawings of the memorial during its building phase. (Photo: Library of Congress) One of the first photos of the memorial after it opened. (Photo: Library of Congress)

4) Twenty-one-year-old Maya Lin, an undergraduate of Yale University, designed the memorial after winning a national design contest open to the American public. 6) In it’s early days, the wall was criticized for its design, black color and simplicity. 7) The memorial is engraved with the names of more than 58,000 men and women who lost their lives in Vietnam. The names are listed chronologically by date of death. 8) A half-scale replica of the memorial has traveled to cities around the United States since Veterans Day in 1996. VVMF calls it “The Wall That Heals.” The traveling tribute has visited 400 cities and towns throughout the nation. Dennis Lovick, who served in Vietnam with the Army from 1967 to 1969, salutes the name of a fallen friend inscribed on the half-size replica of the Vietnam Veterans Memorial. (Photo: Scott Olson/Getty Images)

9) Because some veterans and their political supporters felt the memorial was a “giant tombstone,” Frederick Hart, the third-place winner in the original design competition, created “The Three Servicemen” statue. This life-like statue was added to the site in 1984.

10) There are five names on each line and most panels have 137 lines of names. Visitors are able to trace the inscription with paper to bring home as a keepsake. 11) Each name is entered by a computerized typesetting process—not carved. 12) While the Vietnam Veterans Memorial Fund pays for additions to the wall, it is the Department of Defense that determines whose names are to be inscribed.

13) The first American soldier killed in the Vietnam War was added to the wall on Memorial Day in 1999. According to the Pentagon, his name was Richard B. Fitzgibbon Jr., an Air Force technical sergeant who died June 8, 1956. Chip and Laura Sours of Fort Ashby, W.Va., stand in front of the Vietnam Veterans Memorial. Chip was in Vietnam and Cambodia in 1975. (Photo: Newscom)