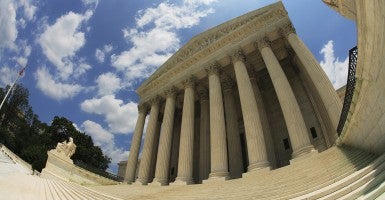 The U.S. Supreme Court announced today it will hear King v. Burwell, a challenge to the Internal Revenue Service’s authority to subsidize health coverage purchased through insurance exchanges run by the federal government.

It’s likely the court will schedule oral argument in early 2015 and issue a decision by the end of June.

Section 36B of the Internal Revenue Code (enacted as part of Obamacare) authorizes premium tax credits for health insurance purchased by qualifying individuals through an exchange “established by the state.”

But since 36 states opted not to run their own exchanges, the federal government created federal “fallback” exchanges for those states. The IRS issued regulations specifying that the premium tax credits could be claimed by individuals who purchased insurance through a federally run exchange.

In July, two appellate courts ruled on challenges to the IRS interpretation:

The D.C. Circuit panel determined that Section 36B “unambiguously restricts … the subsidy to insurance purchased on exchanges established by the state.”

The government had argued that it was “standing in the state’s shoes” when it opened the federal exchanges, and it urged the court to look at the broader goal of Obamacare—near-universal coverage for all Americans—that would be impossible without these subsidies.

The D.C. Circuit panel got it right in Halbig when it refused to accede to the Obama Administration’s expansive “interpretation” of Section 36B.

The panel stated, “There must be evidence that Congress meant something other than what it literally said” in order to depart from the text of a statute. Further, “[w]ithin constitutional limits, Congress is supreme in matters of policy, and the consequences of that supremacy is that our duty when interpreting a statute is to ascertain the meaning of the words of the statute duly enacted through the formal legislative process.”

The federal government decided to slow-walk an appeal of its loss in Halbig by asking the full D.C. Circuit (which President Obama and Senate Majority Leader Harry Reid successfully packed with Obama judges) to rehear the case.

Had the full D.C. Circuit reversed the Halbig decision, this would have meant there was no disagreement among the federal appellate courts—making it less likely that the Supreme Court would agree to hear one of these cases. But the Obama Administration’s attempt to prevent the Supreme Court from considering the case failed.