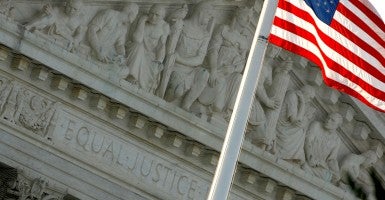 The U.S. flag flies in front of the West Pediment of the Supreme Court building. (Photo: Chip Somodevilla/Getty Images)

Earlier today, the U.S. Court of Appeals for the District of Columbia announced it will rehear a case in which a three-judge panel previously ruled the IRS does not have the authority to subsidize health coverage bought through insurance exchanges run by the federal government.

On July 22 in Halbig v. Burwell, a panel of the D.C. Circuit held that Section 36B of the Internal Revenue Code (enacted as part of Obamacare), which authorizes subsidies for individuals purchasing health insurance on exchanges “established by the State,” clearly restricts these subsidies to state-run exchanges.

The same day, a three-judge panel of the 4th Circuit came to the exact opposite conclusion in King v. Burwell, finding the language of Section 36B is ambiguous and allows the IRS to extend these subsidies to federally run exchanges in states that chose not to open an exchange.

>>> Chart: These 6 Firms Behind Obamacare Website Got Most of  Your Money

Now all 11 active judges on the D.C. Circuit will rehear the Halbig case. As Adam White explained in the Wall Street Journal, “The D.C. Circuit rehears virtually none of its cases. Each year the court’s three-judge panels make roughly 500 rulings, but the court averages roughly one en banc rehearing.”

With these odds, why didn’t the Obama administration go straight to the Supreme Court?

As Hans von Spakovsky and I pointed out, “The decision to slow-walk the Halbig case by asking for an en banc review rather than appealing directly to the Supreme Court certainly gives credence to any suspicions that the new D.C. Circuit was constituted to rubberstamp the Obama administration’s policies.”

But after Senate Majority Leader Harry Reid, D-Nev., was able to push through three new Obama appointees to the D.C. Circuit (by breaking the rules of the Senate to eliminate the filibuster for judicial nominees), it seems Obama likes his chances with the full court of appeals.

In a brief order, the D.C. Circuit vacated the judgment of the panel decision and indicated oral argument in Halbig will take place on Dec. 17.

Meanwhile, the King plaintiffs already have petitioned the Supreme Court for review. The justices may consider whether to take the case at their upcoming “mega-conference” on Sept. 29, or they could delay any action until the D.C. Circuit issues a new ruling in Halbig.

If the Halbig plaintiffs lose (which would eliminate the disagreement between the appellate courts), the Supreme Court will be less likely to review either case.