This Circuit Court’s Obamacare Decision Could Have Huge Consequences 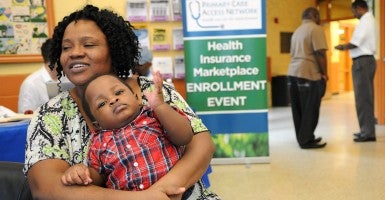 A mother holds her child while waiting to sign up for health insurance under Obamacare in March at the Dover Shores Community Center in Orlando. (Photo: Paul Hennessy/Polaris)

Since 36 states (the administration might deem it 27 states based on nine states’ cooperation with federal exchanges) have opted not to run their own exchanges, this ruling has significant implications for the practical implementation of Obamacare.

Section 36B of the Internal Revenue Code (enacted as part of Obamacare) allows the IRS to make subsidies available to residents who buy health insurance through a state-run exchange. While lawmakers assumed every state would open an exchange, 36 states chose not to do so. In those states, the federal government established exchanges, and the IRS claimed it could extend the subsidies to individuals purchasing insurance through the federally-run exchanges.

The IRS’s revision of Section 36B “significantly increases the number of people who must purchase health insurance or face a penalty.” Further, since the employer mandate’s penalties depend on the availability of credits, this expansion “exposes employers [in states without state-run exchanges] to penalties and thereby gives the employer mandate broader reach.”

The government urged the court to look to the broader goal of Obamacare—near-universal coverage for all Americans—that would be impossible without these subsidies (in addition to the nondiscrimination requirements applying to insurers and the individual mandate to purchase insurance). Yet the court was unpersuaded. In the face of unambiguous statutory text, “there must be evidence that Congress meant something other than what it literally said” in order for the court to depart from the statute’s plain meaning. The government failed to meet this burden, and the court was unwilling to overstep its bounds.

A dissenting judge argued that the court bought the challengers’ “myopic construction” of Section 36B without “regard for the overall statutory scheme,” and defied the will of Congress.

The Fourth Circuit Court of Appeals also ruled on this same issue today. That court found the language of Section 36B is ambiguous and allowed the IRS “interpretation” to stand. A concurring judge helpfully pointed out that when Section 36B says ““[E]stablished by the State” this “indeed means established by the state – except when it does not…”

The judicial branch must respect the separation of powers, and it is for Congress—not the courts or the executive branch—to create the laws. The D.C. Circuit recognized that the IRS’s attempt to rewrite the law (which is the Obama administration’s signature move) was improper:

“Within constitutional limits, Congress is supreme in matters of policy, and the consequence of that supremacy is that our duty when interpreting a statute is to ascertain the meaning of the words of the statute duly enacted through the formal legislative process.”

The D.C. Circuit stayed its decision pending rehearing by the full D.C. Circuit. These cases address only one of many problems with the unaffordable, unworkable, and unfair Obamacare. The consequences of this decision will mean higher costs for individuals who purchase insurance through federally-run exchanges. The Obama administration announced it will appeal to the full D.C. Circuit. Given the split between two federal appellate courts, Obamacare may be heading back to the Supreme Court next term.