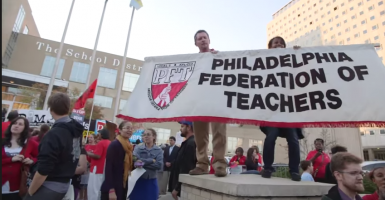 In the final weeks of a heated governor’s race, Pennsylvania’s teachers unions have made their candidate preferences well known.

For the Philadelphia Federation of Teachers, one of the most powerful public-sector unions in the country, this has gone beyond the traditional activities of its political committee, raising some questions about how the union uses money collected from Philadelphia teachers required to pay dues.

In a series of video advertisements and campaign mailings, the union has pushed for the election of Democratic businessman Tom Wolf over incumbent Gov. Tom Corbett, a Republican, all using its own logo and branding and spending big bucks to make the point.

In the most recent action video released last week from the American Federation of Teachers, community leaders, teachers and even students are seen rallying the crowd made up of union members and encouraging a vote for Wolf in the Nov. 4 election.

AFT President Randi Weingarten makes a cameo appearance and gives a whirling speech. “If you believe any of this is unfair, what are we going to do in November? And who are we going to vote for?” she asks.

“Wolf!” responds the crowd in unison.

Beyond the individual videos on its YouTube page, the union also has taken out its own ads blasting Corbett and favoring his political opponent. “Tom Corbett has been devastating to the public education system,” claims the voice-over in the most recent ad.

In September alone, PFT took out more than $114,000 in daytime and prime-time advertisements, all aimed at attacking Corbett and calling voters to arms. According to the Federal Communications Commission, nearly all ads have been classified as “non-candidate issue ads.”

But they have been anything but, political observers argue. The same can be said for printed ads sent to homes across the state.

A recent campaign flyer from the AFT branch in Pennsylvania publicly recommends Wolf for governor, showing a checklist for all issues including education spending, tax fairness and financial security. Apart from the union logo in the corner of the page, it looks like a political ad.

Yaël Ossowski is a reporter for Watchdog.org, a national network of investigative reporters covering waste, fraud and abuse in government. Watchdog.org is a project of the nonprofit Franklin Center for Government & Public Integrity.