Sugar Is Evil and Other Silly Claims in the Obesity Wars 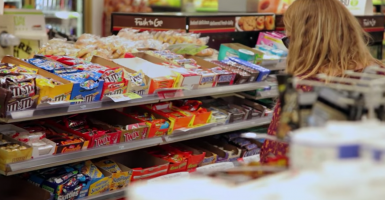 Photo: An image from Fed Up movie trailer via YouTube.

Don’t go blaming willpower for the obesity epidemic–that’d be a “crime” according to the documentary “Fed Up,” by the producer of “An Inconvenient Truth” Laurie David and hosted by Katie Couric.

The film, whose tagline is “the film the food industry doesn’t want you to see,” presents sugar as a harmful, addictive drug and dismisses exercise as a vital component of weight loss.

“The message has been pushed on us–it’s your fault you’re fat,” says Dr. Mark Hyman in the trailer, following up with, “forget about it.”

And that’s what the 2014 film, at least on the basis of the trailer, aims to do: remove the blame from individuals and place it squarely on the shoulders of “junk food” producers.

An aggressive agenda against the sugar industry is at the heart of the film, subtly lambasting Michelle Obama’s “Let’s Move” campaign as well for its focus on exercise as a solution to obesity.

According to David, there “aren’t enough hours in the day” to use exercise as the cure for obesity.

While the film claims to unveil shocking revelations about sugar, the trailer showed nothing I haven’t read in a women’s fitness magazine every month for the past ten years.  Soda is full of added sugar, supermarkets are stocked with high-calorie cereal arranged at kid-level eyesight and would you believe the sugar industry is in business–big shocker–to make money?!

How radical for a business.

What the film doesn’t appear to address enough is educating Americans about the right foods so they can make better decisions themselves–and not just wait for government intervention or an overhaul of the free market food production system.

A featured speaker in the film, Gary Taubes, claims the country is “blaming willpower” (or lack thereof) for our mass entrance into obesity–and that’s wrong, according to him. But that personal responsibility is part of the package, no matter what way you look at it. Instead of trying to force people to make good choices by eliminating “bad” food, people should learn how food affects them so they want to make better choices for themselves. And when it comes to children, parents are the ones responsible for ensuring their children aren’t eating foods in substance or quantity that will lead to obesity.

“Years from now, we’re going to say, I can’t believe we let them get away with that,” says author Mark Bittman of the evil “junk food” industry.

If the sugar industry is wreaking havoc on your life, you have only yourself to blame. Fast food restaurants, airports and convenience stores stock healthy options everywhere now. We have more options than ever before to feed ourselves fairly cheaply with healthy foods at every turn.

The demand for diet, exercise and nutritional education, as seen by the massive diet and exercise industry, is huge. We must respect individual dietary choices whether we like them or not.

If Laurie David and friends or anyone wants to help end obesity, they should focus on education, not elimination of junk food.