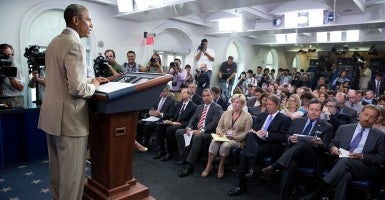 White House reporters are testing a system to circumvent White House involvement in the distribution of press “pool” reports.

As The Daily Signal previously reported, Obama administration officials have come under fire recently from journalists who accuse them of delaying and altering the reports.

“No one should ever assume that the White House is approving or disapproving of the content in any pool report.”

The press “pool” is a system in which reporters share information with their colleagues. A limited number of reporters actually attend events with President Obama, so a designated journalist files a report from which others can draw information. The White House ultimately is responsible for distributing the report to a “pool” of about 8,000 recipients.

But now, the Washington Post reports that journalists have begun to use Google Groups, a platform that allows users to share information with members of a selected, closed group.

According to the Post, the system was tested during Obama’s recent trip to Chicago.

White House Correspondents’ Association President Christi Parsons, who works for Tribune newspapers, told the Post that the alternative system supplements but does not replace the official pool report.

The main obstacle to ending White House involvement is financial.

According to the Post, the White House can “schedule reporters for pool duty, coordinate security clearances so that they can be in proximity to the president and find substitutes when there are no-shows.”

The White House provides these services at taxpayer expense.

To circumvent the White House, the White House Correspondents’ Association would have to hire its own staff to perform these services, a decision currently under consideration by the organization.

“It’s our responsibility as reporters to make sure the reports are accurate and thorough, and no one should ever assume that the White House is approving or disapproving of the content in any pool report,” Parsons said.

Accusations by the press about delayed or changed reports include stories about Obama behind the scenes on “The Tonight Show,” a fainting intern, details about first lady Michelle Obama’s workout routine and a joke told by Obama on a reporter’s birthday that involved “the number 270.”

Parsons told the Post there currently are about 90 people in the test group, and more will be added after an “evaluation period.”