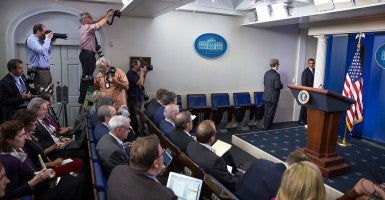 The “most transparent administration in history” is under fire once again. And this time the complaints are coming from journalists who cover the White House.

A dispute over “pool” reports has some White House correspondents crying foul and accusing President Obama’s team of altering and censoring details before the information is distributed more widely to their fellow journalists, the Washington Post reports.

The White House press corps has a long tradition of filing “pool” reports. The intent is largely practical: Rather than having every correspondent cover everything the president says or does, a smaller, rotating group is selected. That group then passes along the pertinent information from the day’s events.

But now there is a catch. According to the Post, the Obama White House is requesting alterations to those reports and sometimes refusing to send them unless reporters remove information. Before a pool report is shared, it must be filtered through the White House press office. The White House is responsible for forwarding the information to the entire pool of more than a thousand journalists.

“While the overwhelming majority of pool reports pass through the White House without delay or amendment,” the Post reports, “some have been flagged by the administration’s press staff, which has demanded changes as a condition of distributing them.”

According to the reporters, some of the changes in dispute are “trivial issues and minor matters of fact,” but any White House intervention “represents a troubling trend.”

“My view is the White House has no right to touch a pool report,” said longtime White House reporter Tom DeFrank, contributing editor at National Journal. “It’s none of their business. If they want to challenge something by putting out a statement of their own, that’s their right. It’s also their prerogative to jawbone a reporter, which often happens. But they have no right to alter a pool report unilaterally.”

Recent actions by the White House have prompted correspondents to consider alternative ways of circulating the information.

Geoffrey J. Lysaught, publisher of The Daily Signal, is concerned about the implications of White House’s role:

Any interference by the White House with the press pool should be of serious concern to those who care about a free press and the First Amendment. White House meddling, even on matters that seem trivial, suggests a lack of respect for the role of journalist in a free society and a fundamental disregard for the Constitution.

It almost seems as if the White House has the attitude that they are performing some favor for the press and therefore have editorial rights.  That’s a slippery slope.

Anecdotes allegedly flagged by the White House include stories about Obama’s appearance on “The Tonight Show” and a fainting intern, details regarding first lady Michelle Obama’s workout routine, and a joke told by Obama on a reporter’s birthday.