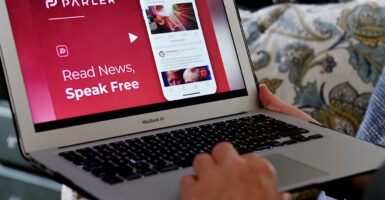 The social media platform Parler is gaining favor among political conservatives, who claim their voices are being stifled by the Silicon Valley giants. (Photo: Olivier Douliery/Agence France-Presse/Getty Images)

Traditional social media networks are experiencing a backlash from users as they continue to “cancel” or otherwise censor conservative views. As a result, alternative “free speech” social media providers such as MeWe and Parler are seeing a surge of new users to their platforms.

Here are three of those social media Davids challenging the tech Goliaths:

The lack of content moderation and what appears to be targeted “fact-checking” of users is driving a flood of new subscribers to Parler. As of Nov. 16, 10 million total users have signed onto Parler, the Henderson, Nevada-based social networking application advertising itself as a haven for “real conversation.” For comparison, however, Twitter reports 330 million active users.

Parler and other services, such as MeWe and Rumble, have managed to attract millions of members via their lenient free speech policies. Parler, for example, promises not to censor its users on the basis of their opinions and to foster a “nonpartisan” public space.

Those standards differ significantly from the current approach of Facebook and Twitter, whose latest free speech policies involve actively limiting the spread of “false” information and “fake news”—a strategy that became increasingly aggressive in the lead-up to the 2020 presidential election following claims of election interference by Russia in 2016.

So long as users do not incite violence or threaten harm, members will not be “deplatformed” for their views on grounds of “misinformation” on Parler.

“In no case will Parler decide what content will be removed or filtered, or whose account will be removed, on the basis of the opinion expressed within the content at issue. Parler’s policies are, to use a well-known concept in First Amendment law, viewpoint-neutral,” Parler’s Community Guidelines state.

That policy effectively enables users to post “inaccurate” content on Parler. Since the site lacks fact-checkers or an independent editorial board, Parler CEO John Matze said, users would instead be “checked” the “old-fashioned way”—that is, via the “Socratic” method, which naturally plays out through open debate or the free exchange of ideas.

Parler’s hands-off approach appears to be a hit with conservatives—particularly supporters of President Donald Trump—who claim that the tech titans’ recent efforts to crack down on election misinformation have unfairly singled out conservatives and users espousing right-leaning views. Republicans in Congress have similarly accused the social media giants of “politically motivated bias and suppression.”

Cruz’s comments were in response to the removal of a New York Post article from Twitter about the alleged improper business dealings in Ukraine of Hunter Biden, the son of former Vice President Joe Biden. Conservatives have complained for years now about what appears to be the tech titans’ inconsistent censoring of right-wing content, while leaving left-wing posts largely untouched.

Similar to Parler, MeWe—an ad-free social media platform that many liken to Facebook—was also founded on a commitment to free speech.

MeWe CEO Mark Weinstein told Rolling Stone last year, “If you’re just a regular person from around the world who has a political point of view and you’re abiding by our terms of service, that’s none of our business … [but] if you’re a conservative or a liberal, and you’re spewing hate, you’re gonna be out.”

Like Parler, MeWe has a strict policy against promoting violence, along with other standard exemptions to free expression in its user guidelines, such as prohibiting pornography, bots, spam, copyright violations, criminal solicitations, and the like.

Apart from those standard exemptions, the Albuquerque, New Mexico-based social media service describes itself as having absolutely “no newsfeed manipulation, no ads, and no targeting”—a policy that sets it apart from its larger Silicon Valley rivals.

The network’s relaxed free speech policy has shot MeWe to the top of the app charts. The “next-gen social network” is currently listed as the #2 free app in the Apple Store, coming in second only to Parler’s #1 free app ranking.

Likewise, the application Rumble—a video-sharing website akin to YouTube—is seeing a surge in popularity. Rumble dubs itself the “free speech” alternative to YouTube.

“We don’t censor political debate or dialogue,” Rumble CEO Chris Pavlovski tweeted on Nov. 10. Like Parler and MeWe, Rumble has skyrocketed to the top of the download charts on the Google and Apple app stores. The company has projected 75 million to 90 million user views on its site for the month of November, up from the 60.5 million views it garnered in October.

The sudden rise of alternative social media sites, such as Parler, MeWe, and Rumble, attest to the market demand for social networks built on “authenticity” and “real user experiences,” not only from conservatives, but from all free speech-minded users.