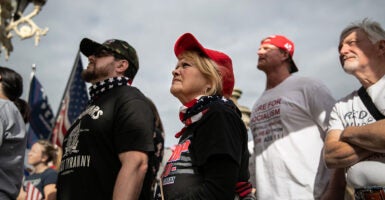 Facebook on Thursday removed a group called “Stop the Steal,” a pro-Trump group organizing public calls for election integrity as several states still have not finished counting ballots. The group had grown to more than 361,000 members in 24 hours.

Facebook justified the decision by alleging the group “called for violence” and was trying to “delegitimize” the election process. The first charge is serious; if there is solid evidence of that, then perhaps Facebook’s decision would be justified.

But the evidence appears thin. A leftist hit piece cited group members invoking the Second Amendment and issuing “vague calls to action” (like “fight” back against political maneuvering) as examples of “violent speech.”

Facebook’s second charge that the group was working to “delegitimize” the election is illuminating. For Facebook, the legitimacy of the election is beyond question; it’s ordinary Americans demanding free, fair, and transparent elections who are the problem.

Facebook announced other “emergency” measures to control which information about the election it allows users to see. These include forcing those who wish to read election-related information to click through a notice offering to redirect them to Facebook-curated election news (Facebook admits this measure is designed to create “friction” to slow down the spread of whatever it determines to be misinformation). It also plans to manipulate its algorithms to slow the spread of undesirable information.

Twitter has an aggressive policy on election misinformation that includes “disputed claims that could undermine faith in the process itself.” In theory, this would apply to literally every claim with an opposing opinion.

For instance, the disputed claim that there is zero election fraud despite hard evidence to the contrary would be censored. In practice, this wide net allows Twitter to selectively suppress information (or allegations that might lead to people finding information) contrary to its favored viewpoints.

The extraordinary measures to censor claims of foul play demonstrate America’s legitimacy crisis. A legitimate election meets two criteria: legality and public assent. That is, our democracy lives or dies on all parties agreeing to peacefully transfer power according to periodic elections that comport with duly enacted laws.

Recently, powerful corporations have taken the cynical view that legality is irrelevant as long as you can control public opinion.

The mainstream media refused to accept the results of the 2016 election and spent three years trying to delegitimize Trump’s presidency with the Russia collusion conspiracy theory (which new government documents suggest was invented by the Clinton campaign to frame him).

Now, those same actors are attempting to silence legitimate questions about the legality of the process that would instill trust in the system if answered honestly.

Is the process transparent? Can both parties verify that the votes are recorded accurately? Do the votes meet procedural legal requirements that ensure fairness (such as being cast by a certain date)?

The surprisingly large number of extremely close states in the 2020 presidential race require these questions to be answered with a higher-than-usual degree of accuracy and precision. As the Stop the Steal Facebook group showed, hundreds of thousands of Americans believe those questions have not been satisfactorily answered. Censorship only breeds further suspicion.

Big tech companies can do America a public service by allowing a free and open discussion of the election results until such time as the legitimate results of the 2020 presidential election have been verified and accepted by both sides.