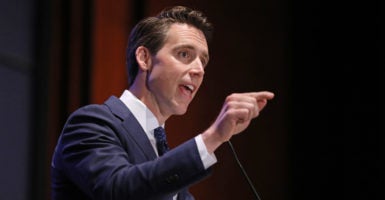 Facebook, Google, and Twitter exercise lots of influence on Americans and they also use their tools to censor some content while amplifying others, Sens. Ted Cruz of Texas and Josh Hawley of Missouri wrote in a letter Monday to the Federal Trade Commission. They are asking the agency to open a public probe into the impact such policies have on people.

“Companies that are this big and that have the potential to threaten democracy this much should not be allowed to curate content entirely without any transparency,” they wrote. “These companies can greatly influence democratic outcomes, yet they have not accountability to voters.”

They added: “They are not even accountable to their own customers because nobody knows how these companies curate content.” Cruz and Hawley are two of the biggest Republican critics of Google and Facebook, both of which are consistently accused of discriminating against conservative content.

Hawley, for his part, introduced the Ending Support for Internet Censorship Act in June that aims to amend Section 230 of the Communications Decency Act, which gives online companies immunity only if they can show they are politically neutral. Section 230 was passed in 1996, when the internet was in its infancy.

Other Republicans are taking a more critical stance against big tech companies as well. Sen. Lindsey Graham of South Carolina, for one, is dinging Google for not doing enough to protect children.

“Things would change tomorrow if you could get sued,” Graham said during a congressional hearing on July 9 dealing with online dangers to kids. YouTube is under pressure to turn off its recommendation systems for videos featuring kids after reports showed potential predators were abusing the feature.