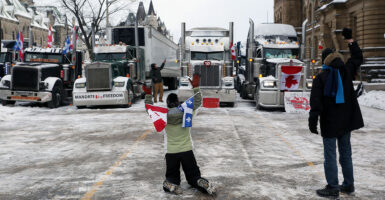 Conservative causes like the "Freedom Convoy" in Canada are routinely censored by GoFundMe. Pictured: The truckers and their supporters protest COVID-19 vaccine mandates and related restrictions on Feb. 4 in Ottawa, Canada. (Photo: Dave Chan/ AFP/Getty Images)

The popular crowdfunding site GoFundMe has taken down yet another conservative donation campaign.

As donations for the “Freedom Convoy” trucker protest in Ottawa, Ontario, reached $10 million on Feb. 4, GoFundMe pulled the plug on it and took the page down, alleging violence and unlawful activity as an excuse.

To add insult to injury, the company wasn’t originally planning on returning the donated funds from the canceled page unless asked. Instead, GoFundMe claimed it intended to distribute the money to charities the truckers selected. After massive public pushback—especially from a number of states’ attorneys general—the platform relented and said it would automatically return the funds.

GoFundMe’s excuse for closing the donations page down doesn’t pass the smell test, because it has a long history of deplatforming conservative causes while conspicuously leaving leftist crowdfunding efforts alone.

Consider a case from back in November 2020, when the site canceled a campaign to erect a billboard in California advertising a book critical of puberty blockers for kids. Local parents tried to get a sign erected that would have read “Puberty is not a medical condition,” along with a photo of the book “Irreversible Damage: The Transgender Craze Seducing Our Daughters” by Abigail Shrier.

GoFundMe offered no explanation beyond claiming the campaign went against the site’s user rules.

In March of last year, it censored another cause for purely political reasons:  A women’s rape crisis center in Vancouver, British Columbia, had crowdfunded $7,000 before GoFundMe killed the page. The page was started by a short-lived internet community called “Super Straight” that wanted to support the one rape crisis center in the city explicitly for biological women. That ran afoul of GoFundMe’s liberal sensibilities regarding transgender people, so the page had to go.

While GoFundMe has ramped up its efforts against conservatives in recent years, the practice tracks back to the site’s early days.

In April 2015, The Daily Signal reported a pair of stories about bakers Aaron and Melissa Klein and florist Barronelle Stutzman, who had their GoFundMe campaigns stripped from the platform after they refused to provide service for gay weddings. The Kleins’ story is notable insofar as it ushered in a change in policy directly responsible for today’s problems.

Prior to the Kleins, GoFundMe’s terms of service prohibited “campaigns in defense of formal charges of heinous crimes, including violent, hateful, or sexual acts.” After they removed the Kleins’ page, the terms were updated to include “discriminatory acts.”

To the leftists in charge at GoFundMe, anything contrary to their narrative can be construed as “hateful” or “discriminatory,” and therefore, ripe for takedown.

GoFundMe’s  bias in deciding what stays and what goes on its platform becomes even more evident when one looks at the types of violent leftist content that’s allowed to remain.

Numerous funding campaigns for violent Antifa and Black Lives Matter rioters have been allowed to remain up on the site while conservatives who have done nothing “wrong” except go against leftist dogma are frequently deleted.

The double standard employed by platforms like GoFundMe over what is acceptable is dangerous. American democracy cannot survive a system where only one political ideology can support causes it likes.

Thankfully, however, there are burgeoning alternatives. As of this writing, the Canadian truckers have raised more than $6 million on the Christian crowdfunding site GiveSendGo. While it would be preferable if GoFundMe would drop its ideological bias and accept donations to non-leftist causes, in the meantime conservatives should financially support causes they agree with through whatever means necessary.

The left might try and stop us, but we’ll just keep on truckin’.