After Receiving Over $100K in Donations, Bakers’ Crowdfunding Page Shut Down 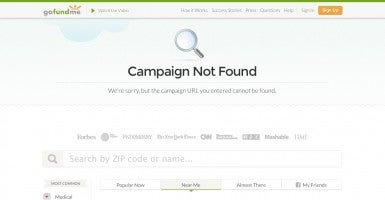 Less than a day after a donation fund was set up for the Oregon bakers who the state recommended be fined $135,000 for refusing to make a cake for a same-sex wedding, the crowdfunding website, GoFundMe, has shut it down.

“The campaign entitled ‘Sweet Cakes by Melissa’ involves formal charges. As such, our team has determined that it was in violation of GoFundMe’s Terms and Conditions,” a spokesman for GoFundMe told The Daily Signal in a statement.

The fundraising page was launched Friday after an Oregon administrative law judge announced the fine. Supporters of Aaron and Melissa Klein, owners of Sweet Cakes by Melissa in Sandy, Ore., raised more than $109,000 before the page was removed.

>>> State Says Bakers Should Pay $135,000 for Refusing to Make Cake for Same-Sex Wedding

In response to being shut down, the Klein’s wrote on their Facebook page, “We have told GoFundMe that the money is simply going to be used to help our family, and there is no legitimate breach of their terms and conditions. We are working to get the account reinstated.”

On GoFundMe’s terms and conditions, which are available to the public, the company prohibits “campaigns in defense of formal charges of heinous crimes, including violent, hateful, or sexual acts.”

Anna Harmon, attorney for the Kleins, told The Daily Signal that what happened to the Kleins “is not a crime.”

“It was heard in an administrative court and there has been no opportunity or a jury or even a final order to be issued in the case yet,” she said.

Harmon added that Melissa and her five children, who all stand to benefit from the public’s donations, have been exonerated.

Melissa and her children were not present at the bakery at the time of the refusal.

GoFundMe said the money raised thus far “will still be made available for withdrawal,” which means the Kleins will be able to keep the donations. In the meantime, the family has set up a temporary donation page on Samaritan’s Purse.

“For all of you who gave to the GoFundMe account before it was shut down, we so appreciate your love and generosity,” the Kleins wrote on their Facebook page.

A similar donation page for Barronelle Stutzman, a Christian florist from Washington state who refused to make flower arrangements for a same-sex couple’s wedding, has been operating on GoFundMe for more than two months.

Stutzman, like Aaron Klein, is being held liable for violating the state’s anti-discrimination law.